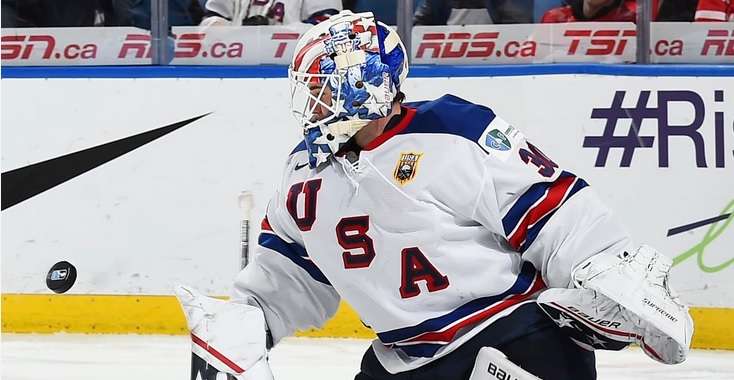 Jake Oettinger will be one of the goaltenders in the U.S. net after a good rookie season in the NHL

The Americans have had a good run the last several years with younger teams, winning bronze medals in 2013, 2015, and 2018. And with 19 of 26 players on the roster coming from the NHL this time, this should be a fit and energetic group that competes in Riga.

He’ll be joined by Cal Petersen and Anthony Stolarz. Petersen just finished his third year with the L.A. Kings and was the third goalie for the Americans back in 2017 at the World Championship. Stolarz has been a backup with three NHL teams, most recently Anaheim.

Adam Clendenning, a 28-year-old with Cleveland of the AHL this past season, has the most IIHF experience on the American blue line. He won back-to-back gold with the U18 team in 2009 and 2010, and in 2012 he also played at the World Juniors.

Zac Jones made his NHL debut with the New York Rangers this past season and is the youngest player at 20. Chris Wideman is the veteran. The 30-year-old played for Nizhny Novgorod in Russia this past year and also has 181 NHL games to his credit. He also played at the 2016 Worlds when the U.S. finished 4th. Christian Wolanin played at the 2019 Worlds but hasn’t played much the last couple of years.

Connor Mackey, Matt Roy, Ryan Shea, and Matt Tennyson are all making their USA Hockey debuts in Riga. In all, the defence is mobile and quick and will be counted on to move the puck quickly from defence to offence.

The 34-year-old Justin Abdelkader will lead the American offence. He won bronze with the U.S. at the 2007 World Juniors and later played at two World Championships as well as the 2016 World Cup. At the other end of the spectrum will be 21-year-old Matt Beniers, who played at the World Juniors in Edmonton this past January. He’ll have company in Jack Drury, also 21 and the nephew of Chris, who played in the 2019 and 2020 World Juniors. Drafted 42nd overall by Carolina in 2018, Jack had a successful year in Sweden with Vaxjo.

The San Jose Sharks have done their part for the team, contributing three forwards to the roster – Sasha Chmelevski, Ryan Donato, and Kevin Labanc. Chmelevski was a late round selection by the Sharks four years ago, and he made his NHL debut this past season. Donato is a former Olympian, having played at the 2018 Games, where he had five goals in as many games, tied for the tournament lead with gold-medal players from Russia, Ilya Kovalchuk and Kirill Kaprizov. Labanc is the most established NHLer, having been a full-time member of San Jose for the better part of five years.

Tage Thompson brings a perfect record of sorts to the team. He has played in three IIHF events for the Americans – and won three medals – gold at the 2015 U18, gold again at the 2017 U20, and bronze at the 2018 Worlds. The 21-year-old Jason Robertson is a fine pickup for the team. He established himself as a bona fide NHLer this past season with Dallas, scoring 18 goals and 45 points in 51 games.

Jack Capuano has been the associate coach in Ottawa the last two years after seven seasons as head coach with the New York Islanders. Although this is his first position behind the USA bench at an IIHF event, he has previous experience as head coach of the U18 team at the 2005 Five Nations Cup. He was also an assistant coach at the 2017 World Championship and the 2016 World Cup.

All in all, the Americans have a relatively young team with plenty of U18 and U20 experience. They will be quick and won’t lack for confidence, and if Boyle and Abdelkader can come in and provide some stability and expertise to the dressing room, there is no reason this team can’t go far. But given the pandemic and uncertainty of various rosters, it’s not clear just yet what exactly they’ll be up against. That being said, any entry from the U.S. is a de facto medal threat – execution will be the determining factor.