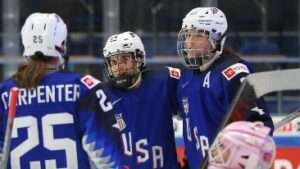 Hilary Knight (right, with Alex Carpenter and Dani Cameranesi), who topped the points race en route to gold at the 2019 Women’s Worlds, led the way again as the U.S. women won four out of five Rivalry Series against Canada

The Americans finished up with four wins in the five-game 2019-20 Rivalry Series against Canada. Relying on speed and puck possession, coach Bob Corkum’s team dictated the play and outscored their cross-border foes 15-9. The U.S. are the defending Olympic champions and have won five straight Women’s Worlds.

Meanwhile, in the Euro Hockey Tour playoffs, Finland triumphed with three straight victories, blanking host Sweden 4-0 in the final. The Finns made history with a silver medal on home ice at the 2019 Women’s Worlds in Espoo.

Of Knight’s continuing prowess, Corkum said: “Not surprised at all. She’s been doing it for a long, long time. She’s one of the many, many leaders we have in that dressing room, and she certainly answered the bell.”

Victoria Bach was the top-scoring Canadian (2+1=3), and 2018 Olympic MVP Melodie Daoust and Halifax native Jill Saulnier also totalled three points apiece (1+2=3). Bach, who was the 2019 CWHL rookie of the year with the Markham Thunder, won U18 gold in 2014. However, the slick 23-year-old forward, a former Boston University star, has yet to make her official IIHF debut.

In a worrying reminder of Espoo, Canadian captain Marie-Philip Poulin sat out the concluding 4-3 overtime loss at the Honda Center with an undisclosed injury. The lone woman to score in three Olympic finals, Poulin, 28, only hit the ice for a grand total of 4:44 at the last Women’s Worlds, where Canada settled for its first bronze medal ever.

Both teams struggled to convert with the power play during the Rivalry Series. Special teams will be particularly crucial for new Canadian coach Troy Ryan’s team as it quests for its first Women’s World gold medal since 2012.

Let’s take a look at the highlights.

The Rivalry Series, now in its second year, kicked off with a pair of December games. The U.S won Game One (14 December) 4-1. Amanda Kessel scored the winner and added an assist, and goalie Alex Cavallini (nee Rigsby) shone with 31 saves in Hartford.

Game Three (3 February) in Victoria attracted a capacity crowd of 7,006 to the Save-On-Foods Memorial Centre, reminiscent of the vibe during the 2019 World Juniors. Bach sent the Canadian fans home happy when she tallied the 3-2 overtime winner on a beautiful set-up by Nova Scotia native Blayre Turnbull.

“It was so exciting,” said Canadian veteran Brianne Jenner, who opened the scoring on a shorthanded breakaway. “Every goal tonight, the bench just went wild. Especially when it’s one of our younger players, to see them get a goal, we’re pretty excited.”

In Victoria, Knight got her 200th career national team point on a second-period power play goal. She would play an even bigger role in Game Four (5 February) in Vancouver.

This was the first time the Americans had played there since the 2010 Olympic final, and Knight, 30, hadn’t forgotten that bitter 2-0 loss. First, she fed Hayley Scamurra for the winner, and then she shushed the partisan crowd after adding a late empty-netter to clinch the Rivalry Series with a 3-1 victory. It all happened in front of Knight’s childhood idol, Cammi Granato, who had welcomed the U.S. team for dinner at her North Vancouver house the night before.

Asked afterwards about what she recalled about the back-and-forth with Canadian fans following the Olympic gold medal game, Knight didn’t hold back: “We were told to go back to our country and die. So I took it pretty personally. It’s salt from 10 years ago. We could play these guys 100 days out of the year and it would still be the same. And I think that’s what the fans feel – they feel that fabric of the competitive rivalry.”

The blinding speed of the U.S. trio of captain Kendall Coyne Schofield, Brianna Decker, and Dani Cameranesi gave the Canadians fits as the series wore on.

Game Five in Anaheim (8 February) was far from a formality. With an attendance of 13,320, it was the largest U.S. crowd ever to witness a national women’s team game. The previous record of 10,158 was set on 6 January 2002 when the U.S. beat Canada 7-3 at Detroit’s Joe Louis Arena.

Megan Bozek potted the 4-3 power-play winner just 42 seconds into overtime. Canadian starter Genevieve Lacasse made a stellar glove save on Bozek’s initial howitzer and then flailed Dominik Hasek-style to sweep the puck out of the crease. But Lacasse couldn’t recover in time to stop the hard-shooting American blueliner’s follow-up.

Monique Lamoureux-Morando tipped in the 3-3 equalizer for her first Rivalry Series goal with 11 minutes left. She is vying to solidify her return with the Stars and Stripes, along with her sister Jocelyne Lamoureux-Davidson. The 30-year-old twins took time off to have children after leading the U.S. in the 3-2 shootout win over Canada in the 2018 Olympics final.

The U.S. gained momentum as this series went on, and if the shots on goal totals in the last two games (26-12 and 30-20) are any indication, Canada’s netminding needs to be elite if the Americans are to be dethroned in Halifax.

Ranked third in the IIHF Women’s World Ranking as the best European team, Finland lived up to its advance billing in this six-nation tournament. Coach Pasi Mustonen’s team had a perfect 3-0 record and a 15-3 goal difference in the final event of the current Euro Hockey Tour, held in Tranas, Sweden.

The Finns never trailed, beating Germany 3-1, Switzerland 8-2, and Sweden 4-0 in the final. Forward Petra Nieminen led the tournament in scoring (3+5=8). The 20-year-old is enjoying a breakout season with the SDHL’s Lulea HF (24+30=54 in 34 games for third in league scoring). Established stars Susanna Tapani (1+7=8) and Michelle Karvinen (4+3=7) placed second and third respectively in the points race.

All things considered, coming second was a worthy feat for Sweden. 2019 was tumultuous for the Damkronorna.

The Swedes were shockingly relegated for the first time ever at the 2019 IIHF Ice Hockey Women’s World Championship after a 3-2 loss to Japan left them in ninth place. The blue-and-yellow women’s players also staged a protest in search of better treatment from the Swedish federation. That resulted in the cancellation of the annual 4 Nations Cup, originally slated for Lulea in November.

It wasn’t a totally consistent performance for the hosts. The Russians outshot coach Ylva Martinsen’s troops 29-19 in their opener, but goalie Sara Grahn’s strong performance helped the hosts to a 3-1 win. However, the Czech Republic’s Natalia Mlynkova scored twice, including the shootout winner, to lift her nation to a 2-1 victory over Sweden. Czech goalie Klara Peslarova sparkled in this tournament, surrendering just two goals on 53 shots in her two starts for a 0.96 GAA and 96.2 save percentage.

That said, the Swedes are favoured to secure promotion back to the top division in April. They will face Austria, the Netherlands, Norway Slovakia, and host France in Angers in April’s Division I Group A tournament.

The resurgent Russians topped Switzerland 3-1 in the third-place game, sparked by a pair of assists from team scoring leader Anna Shokhina (1+4=5). The Swiss are still looking for answers after the post-PyeongChang retirements of key players like goalie Florence Schelling and defender Christine Meier.

Long-time Czech captain Alena Mills stepped up with the winning goal and added an assist as her team edged Germany 2-1 for fifth place. There was a significant historical highlight in Transa for the German women, however.

Andrea Lanzl became the all-time leader in international appearances among German national team players (both male and female) when she suited up against Finland. It was her 322nd international game, surpassing Udo Kiessling (321), who was also the first German NHLer in 1982-83 with the Minnesota North Stars. Lanzl, a 32-year-old forward, has played in eight top-level Women’s Worlds, starting in 2005, and two Olympics (2006, 2014).

IIHF Council Member Franz Reindl, the President of the German Ice Hockey Association, extended his congratulations: “Andrea Lanzl has achieved a milestone in ice hockey, but also in German sport, thanks to her attitude, great successes, and sporting and human qualities that are revealed through the record number of 322 international matches.”