Andras Benk has seen it all with Hungary 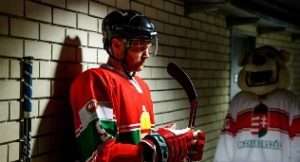 For anyone who represents a country such as Hungary playing in the top division is a great accomplishment. Playing in two top-level World Championships during a career is a tremendous achievement and only a couple of Hungarian players have pulled off this feat, one of them being Andras Benk.

“If I remember correctly my first game for the Hungarian national team was in the Ice Palace against Croatia in November of that season. The final score was 3-3, and I scored in the shootout. In those early days I remember sometimes playing in one lineup with Gabor Ocskay Jr or Krisztian Palkovics. Pat Cortina was the coach at the time and would throw me in with them. These are great memories to look back at,” remembers Andras Benk when asked about his first experience with the national team.

The 30-year-old forward came along in Hungarian hockey in a peculiar time. He made his debut in the national team during the 2005/2006 season, two seasons later head coach Pat Cortina picked him to make his first World Championship, which happened to be where Hungary won promotion to the top division. The 2008 Hungarian team was made up of mostly players born between 1975 and 1980, which has become known as the golden generation in Hungarian hockey.

“It is an interesting situation. 10 years have passed without me really realizing it. I really didn’t notice the turnover on the team until we played for the 90th anniversary of Hungarian hockey when I was named the captain. We faced Poland and I was the oldest player on the team. The guys that were older or more experienced than me have stepped aside or retired,” said Benk as he talked about his observation.

During the season he and Janos Vas were the oldest players still carrying the torch and getting ready to pass it to the next generation of players that are breaking in and possibly the next golden generation (born between 1994-1997).

“I am the link between the older generation and the guys coming up right now. My teammates back then had grown up in a completely different world than the ones that are coming up right now. However, we are playing hockey and chasing the little black puck on the ice and trying to put it into the back of the net. I am really enjoying this and as I am getting older I am noticing that I am enjoying hockey more and more. I hope to be a key member of not only the national team but my club team as well for the next few years.”

Vas spent most of his career playing in the top leagues throughout Europe and North America, Benk has spent his entire career in Hungary aside from playing one year in Sweden. Benk came up through the youth system of Dunaujvaros, which produced not only Benk and Vas but other Hungarian players such as Balazs Ladanyi, Viktor Tokaji, Marton Vas, Imre Peterdi and Zoltan Hetenyi. He debuted for the senior team in the Hungarian league before moving on to spend one season in Sweden playing for the U20 team for Huddinge.

“It is an interesting turn, it was a great experience for me to be playing with Ocskay, Palkovics or Balazs Ladanyi when I first played in the national team, playing in one line with them and assisting on one of their goals or scoring off of a pass from them was always a great experience. They have aged out and gotten older. I remember sitting in the stands or next to the glass and watch the great Dunaujvaros-Szekesfehervar matches, Levente Szuper was in the net, and Csaba Kovacs Jr. scored in a shootout for Fehervar with the stands jampacked with fans. Now I am the one, along with Janos Vas maybe, who can talk about what it used to be like. I do feel that the younger players look up to me and what I have accomplished, but I am always happy to pass on what I have experienced and learned to the next generation. The world and the hockey world have changed tremendously in the past 10 years. The game has picked up in speed and we are different style of play.”

Benk came back from Sweden and played for Szekesfehervar in the Austrian-based EBEL for nine seasons and has spent the past two playing for UTE in Hungary. On the international stage he has played in nine World Championship tournaments, which included two emotion-filled promotions to the top division and two appearances there in 2009 and 2016.

“I was very young in Sapporo, that was my first World Championship and I was very happy that Cortina had selected me to make the team. I was so young I don’t think I realized what was going on. I was just doing what I was told, just going and working hard. I was at the right place at the right time and it was an honour to play with the guys that I was on one team with. We won promotion again a few years later with a young team. It is a great feeling to be playing a larger part and to be an older player when we won promotion to the top division in 2015,” Benk said and continued:

“In 2009 in Switzerland we were only seconds away from picking up our first points in the top division against Slovakia. I assisted on Roger Holeczy’s goal in that game. We thought this was a great accomplishment but then this was followed up by a game against Canada and they cleaned the ice with us. But we needed to taste this so to learn and use the experience to be back sooner. In 2016 in Russia we had a better chance to stay in the top division and we played some great games. We have been playing against top-level teams recently. When I first started in the national team we would play matches against teams that were at our level or just below us. In the past few years we have been playing games against stable top-level countries in preparation for the World Championship. This helps the learning process for us and it is easier for us to adjust to their pace if we face more countries like this.”

The goal this season of course is to win promotion back to the top division under the guidance of new head coach Jarmo Tolvanen at the 2018 IIHF Ice Hockey World Championship Division I Group A in Budapest.

“I really hope that the next step is that we become an ‘elevator’ country such as Austria or Slovenia and eventually be in the top division more often than in the Division I. We have more and more players playing in the top leagues in the world. We need a player to make it to the NHL and these chances are improving every year. Ádam Vay is right there and with a little luck he will have the breakthrough to make it to an NHL roster. With this eventually the national team will be in the top division. That would be a great experience not just for the players but also for the fans.”

Regardless of what happens in the next few years, what is for sure is that Hungarian hockey and anyone that Andras Benk has played with has only benefited with him being in and around the sport and he hopes to continue doing this for years to come. “I have two top-division appearances and good number of World Championships under my belt, this being said I am still only 30 years old, which in hockey is still a good age.”