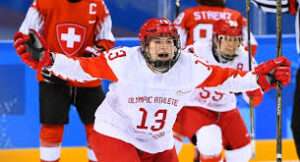 The Olympic Athletes of Russia finally found their scoring touch, putting six goals past the previously undefeated Swiss to advance to the semi-finals for the first time at an Olympic Games.

In an absorbing spectacle, decorated by classy goals from Anna Shokhina and Alina Muller, the OAR picked up a first win of the Games at just the right time, shooting down the 2014 bronze medallist 6-2 and keeping alive its dream of first-ever Olympic hardware.

The OAR came into the game on the back of three Group A losses with an aggregate score of 15-1. More worryingly, it took Alexei Chistyakov’s girls 230 minutes of game time to record their only goal in a toothless group stage performance.

Switzerland, by contrast, was flawless in Group B, securing top spot with a 2-1 success over Sweden after comfortable victories over Japan and Korea. And the language of the two teams was very different after their final group-stage outings. While the Swiss talked of momentum and confidence, the Russians pondered a misfiring forward line and looked to the QF with hope rather than expectation.

But all that was forgotten in the eighth minute when Shokhina gave the Olympic Athletes a shock lead. Switzerland was enjoying a five-on-three power play at the time, but Lara Stalder got ambushed on the red line and Shokhina was clean through on Florence Schelling’s net. After so many wasted Russian chances, this one was converted with finesse: skating across the face of goal to force Schelling into a move, Shokhina wrapped it up by going top shelf in a move with hints of Connor McDavid’s flair.

The Swiss hit back hard: Nadezhda Morozova made a point blank save when Evelina Raselli looked to redirect a Stalder feed; seconds later it took a blocker to deny a Stalder blast. The next victim was Lisa Ruedi, with the Swiss youngster denied her first Olympic goal by another fast-moving blocker.

Morozova kept her goal intact until the first intermission, but had no answer to the latest piece of Muller magic early in the second. The Swiss forward, so predatory in the group phase, began her latest masterclass behind her own net. An exchange of passes with Christine Meier got her halfway up the ice, and then things really started smoking. A surge of acceleration took her into OAR territory, great hands left Yekaterina Nikolayeva floundering on defence and a high backhand finish finally beat Morozova. Muller moved on to seven goals in Korea, just two behind the record of nine in any one Olympic women’s tournament. That record is jointly held by Meghan Agosta (Canada) and Stephanie Marty (Switzerland), who both hit a purple patch in 2010.

Now the Swiss were poised to take control of the game. Sara Benz shot a chance narrowly wide, Phoebe Staenz was denied by a well-timed poke check from Nina Pirogova, and the Russians were left relying on the counter-attack, where Valeria Pavlova tested Schelling. Finally, the pressure told – and Stalder made up for her first-period slip by shooting Switzerland in front. It was another high-quality finish, a wrist shot from between the hashmarks tucked tight inside the angle of post and bar to give Morozova no chance of reaching it.

That lead was short lived. Viktoria Kulishova tied it up barely two minutes later, converting the rebound after Yekaterina Smolina’s shot was padded away by Schelling. And the OAR went into the second intermission with the lead after a power play goal from Liana Ganeyeva. The defender’s point shot took a deflection off a Swiss stick and wrong-footed Schelling to make it 3-2.

Switzerland began the third period at a high tempo, but after Morozova denied Staenz from close range and Muller hit the post after intercepting a stray pass, it was OAR that extended its lead. Sabrina Zollinger’s wayward clearance went straight to Shokhina, who advanced on Schelling’s net with Yelena Dergachyova and released an astute feed to set up her unmarked team-mate for the goal.

The Swiss refused to give up – even when short-handed, Stalder and Muller found a way to carve through the Russian defence – but found Morozova in obdurate form. And when Shokhina converted the same power play seconds later, it was game over. The 20-year-old, a star on the Tornado roster that dominates Russia’s Women’s Hockey League, played an incisive pass to Dergachyova on the post and collected a threaded return feed to tap into net. Captain Olga Sosina completed the scoring with an empty-net goal.