Argentine players overcoming hurdles to get on ice 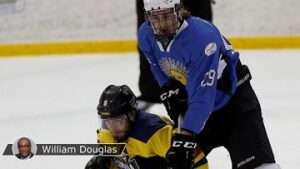 Argentine hockey players have to go to the end of the world if they want to play a five-on-five game in their country.

With small ice rinks in large cities like Buenos Aires, an Olympic-sized outdoor rink Ushuaia, a town at the southernmost tip of South America with a sign in Spanish that says “fin del mundo” — end of the world — is the only option for a full game.

“We don’t have a lot of economic help to promote the sport,” said Jorge Dicky Haiek, coach of Argentina’s men’s national team, “so we need to create, promote the sport and be better and better with our resources. It’s very difficult.”

Argentina’s men’s and women’s teams overcome several hurdles to play the game they love in a soccer and basketball-obsessed South American country of nearly 45 million people.

Like their Latin American rivals that competed in the 2019 Amerigol LATAM Cup tournament held at the Florida Panthers IceDen in September, most of Argentina’s players are in-line hockey players who transition to ice when it becomes available.

Hockey is an expensive sport in the United States and Canada, but more so in countries like Argentina because of the currency exchange rates, shipping charges (if buying online) and taxes.

“We don’t have sticks there (in Argentina),” Haiek said. “We have to go to Miami; someone goes, picks up the sticks, carries them on the flight. It’s very difficult; the import, the export.”

Rather than spend hundreds or thousands of dollars to replace broken sticks, skates and other items, some players turn to Argentine women’s coach Roberto “Racki” Villagra, who has become the go-to guy in the country for making damaged hockey equipment good as new.

At the Amerigol Cup, Villagra proudly displayed a repaired stick he’s been using since 2009, noting that it has the same flex as when it was first purchased.

He also showed off “Frankenskate,” a beat-up pair of Bauer boots used by an Argentine player for ice and in-line hockey. The blades are interchangeable, held to the boots by easily removable screws and bolts instead of rivets.

“There’s no pro shop there, there’s only one person that imports that stuff, and it’s really, really expensive,” said Leana Villagra, Racki’s daughter, whose 11 points (seven goals, four assists) in three games helped lead Argentina to the Amerigol Cup women’s championship. “It’s better to fix it over and over again, and that’s what he does.”

Fixing what would be considered unrepairable in North America and traveling great distances (Ushuaia is nearly 1,475 miles from Buenos Aires by air) to play on a regulation-sized rink shows the love some Argentines have for hockey.

Argentina has been an associate member of the International Ice Hockey Federation since 1998. The country has 1,060 players; 630 men, 290 women and 140 juniors.

“We have a heart, passion and creativity, like (soccer star) Messi and (former NBA player) Manu Ginobili,” Haiek said. “We work so hard to involve all the kids to play because it’s the best sport of the world — ice hockey and in-line hockey is the best of the world.”