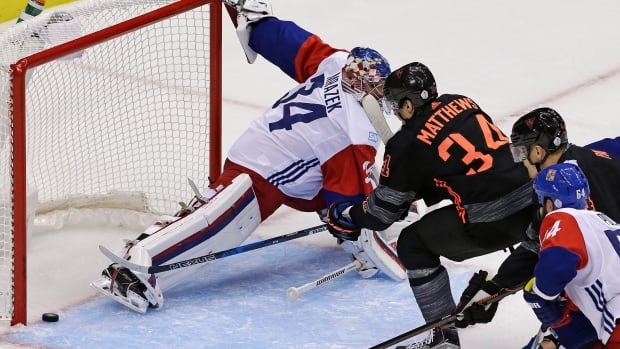 By Neil Davidson – The Canadian Press

The World Cup of Hockey has yet to start but Toronto Maple Leafs teenager Auston Matthews has already made an impression.

The six-foot-two 210-pound Matthews “hasn’t taken a back seat to anybody — respectfully,” McLellan said.

“He has not been shy in the locker-room. He’s not been afraid on the ice,” the coach added. “He’s a pretty exciting player right now. Certainly the Leafs will have a fun one to watch for many years.”

Goalie Frederik Andersen was slated to play for Team Europe but withdrew due to injury.

Eager to play at ACC

Matthews, taken first overall in this past June’s NHL draft after performing well during a season in the Swiss league, says he is looking forward to playing at Air Canada Centre.

North America captain Connor McDavid, the first overall pick in 2015, said Matthews is getting more and more comfortable with each outing.

“He’s a big body and he’s confident with the puck,” McDavid said. “He makes good plays. He already has a pretty good defensive game as well.”

North America, made up of players 23 and under, opens tournament play Sunday against Finland.