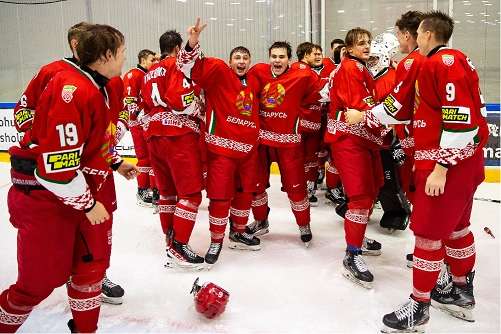 Belarusian players celebrate after the win in the deciding game against Norway.

Following a five-year absence Belarus will be back competing among the top-ten nations at the 2023 IIHF World Junior Championship in Novosibirsk and Omsk, Russia.

Five straight victories, including a final-day rally against Norway, sees Belarus win promotion from the 2022 IIHF Ice Hockey U20 World Championship Division I Group A with 15 points out of a possible 15.

But despite a perfect record, Belarus’s procession to promotion in Denmark´s Horsholm wasn´t as straightforward as the final standings might suggest. During a pulsating final day encounter against fellow promotion hopefuls Norway, the Belarusian promotion campaign briefly looked in danger of derailing.

With Norway leading 2-0 midway through the second frame, the Scandinavians went dangerously close to further stretch their lead.

Only seconds later, Yegor Chezganov pulled a goal back for Belarus kickstarting their fightback. Alexander Suvorov then scored the game-tying goal at 8:17 of the third period, which guaranteed promotion for Belarus. Valentin Demchenko sealed their victory and perfect record with an empty netter with 42 seconds left in regulation time.

“When the score became 0-2 everyone understood that there was no turning back. They all had to give the best, leave everything on the ice,” said Belarusian forward Alexander Palchik. “In the third period we started to play more aggressively, to forecheck and Sanya Suvorov scored a great goal.”

Team captain Suvorov of Dynamo Minsk led by example and finished as top scorer of the tournament notching 4+7 in 5 games. Latvia’s Raivis Ansons tallied 4+5 to finish second, followed by another Belarusian, Vitali Pinchuk on 2+7 in third.

Belarus returns to the top division of the World Juniors for the first time since 2018. Eight players from the gold-winning Division 1A roster will be eligible to defend the Belarusian colours in Russia next year. The triumph in Denmark also marks a winning start for new head coach Sergei Stas.

“It turned out to be a difficult game. We beat one of the best teams. It was not easy, we endured it, withstood the pressure and showed character. The emotions are indescribable and they will be unforgettable,” said Stas.

Latvia finished second in the standings. They won silver following four victories and a narrow 2-1 defeat against Belarus. Norway ended up with the bronze medals. But heading into the final round of games, all three teams still harboured hopes to strike gold at the Bitcoin Arena.

For Norway to finish top, the Scandinavians needed to beat Belarus with a four-goal margin or more. Latvia on the other hand kept their fingers crossed for a Norwegian win against Belarus but with no more than three goals. Latvia would then be required to do their job by beating Kazakhstan in regular time in their final game sneak past and finish top on a better head-to-head record.

Despite Norway emphatically outshooting Belarus 15-5 in the first frame, the game was still goalless at the first intermission. The Scandinavians were finally rewarded for their offensive endeavour during a high-octane second frame. Mikkel Oby-Olsen outmuscled Pinchuk in the corner, found Sander Engebraten who fed it along the blue line to Ole Julian Holm. The Norwegian captain’s one timer was tipped past Alexei Kolosov by Martin Johnsen as Norway went in front at 9:21 of the middle frame.

Having finally managed to find a chink in Kolosov’s armour, the Norwegians doubled their lead 65 seconds later thanks to a lighting quick move. Jonas Haughom won the puck behind his own net, fed Patrick Elvsveen who hit a pin-point pass to Eskild Bakke Olsen, who raced past Arseni Sazanovich and one-on-one deked Kolosov to finish in style.

With the Belarusians momentarily struggling to find their composure, pesky Norwegian attackers surged ahead in their hunt for more goals. Elvsveen missed a fine opportunity to increase Norway’s lead as Belarus only seconds later got back into the game. Demchenko picked up the puck, backhanded it to the burly Artyom Levshunov, who barrelled down centre ice towards the Norwegian net. Surrounded by four Norwegians the puck dropped to an unmarked Chezganov in the slot, who ripped a wrister past Markus Stensrud at 13:46 of the second period.

The pulsating see-saw battle of offensive hockey continued in the third frame as both teams needed to score. The speed and skill from Norway´s Philip Granath and Sander Wold caused visible problems for the Belarusian rearguard. But as Norway failed to capitalize on their chances, Belarus tied the game with a fine move at 8:17. Instigated by the influential Pinchuk, his cross-ice puck found Suvorov on the left flank. On a two-on-one rush, the Belarusian captain tried to pass it across to Sergei Kuznetsov, but hit Norway´s blueliner Haughom before reacting quickest on the rebound to tie the game at 2-2.

With 2:15 left of the game, Norway called a time-out with head coach Tobias Johansson pulling Stensrud from the net in a final effort to grab a winner and salvage a silver medal. Instead, Demchenko with 42 seconds from the end scored an empty netter and the game-winning goal for Belarus.

En route to the gold triumph, Belarus had gotten off to a flying start in Division IA. Nine different players scored as hosts Denmark was mauled 9-1 in their opener. Belarus continued their free-scoring form in their next game against newly-promoted Hungary. 5-1 up after the first frame in a game they eventually won 8-2. Pinchuk enjoying a fine afternoon tallying 1+4. Another fine individual display came against Kazakhstan with Chezganov tallying 2+2 in a disciplined 4-2 victory.

But as was on display in their final game against Norway, this crop of Belarusian players was also capable to grind out results. Against second-placed Latvia, Belarus was outshot but narrowly toppled its neighbours in a 2-1 win. Metallurg Zhlobin’s Ilya Spat scored with a close-range backhand at 13:33 of the middle frame to put Belarus ahead. On a two-on-one rush Suvorov finished high past Latvia’s netminder Bruno Bruveris at 12:52 of the last period. Latvia’s top scorer in the tournament, Ansons, pulled a goal back with 4:43 left of the third period. Despite Latvia going for bust pulling Bruveris from the net with two minutes left of regular time, Belarus withstood the storm.

Kazakhstan who came down from the top division, finished fourth under new head coach Alexander Istomin. At the bottom end, hosts Denmark got their first three points on board when it mattered the most. Blanking Hungary 4-0 in the relegation decider keeps the Danes in the group, while Hungary heads straight back to Division IB following five straight defeats.