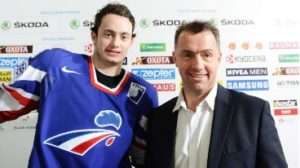 France had a great start at the 2018 IIHF Ice Hockey World Championship with long-time head coach Dave Henderson behind the bench. Today it was announced that the 66-year-old will retire as a coach after the tournament and after 14 years as head coach of “Les Bleus”.

Henderson moved to France in the ‘70s to play and coach Amiens before joining the French national team program as the U20 national team coach in 1999. He took over the men’s team in the 2004/05 season and brought it back to the top division in 2007. Since 2008 France has been playing in the top division without being relegated. The best placing was in 2014 when France reached the quarter-finals and finished in 8th place – the best World Championship placing since 1953. Last year on home ice in Paris the French tightly missed out on a playoff qualification and were 9th.

A successor has already been found: French hockey legend Philippe Bozon will take over and be the French national team head coach as of the upcoming season. The 51-year-old IIHF Hall of Fame member brings with him vast international experience as a player. He was the first French-trained NHL player and represented his country in four Olympic Winter Games and in 12 IIHF Ice Hockey World Championship events (including eight in the top division).

After ending his career as a player with Geneva-Servette in 2006 he started to coach the junior teams of the club and coached the French U20 national team at two occasions before moving to senior pro hockey. He coached HC Lugano and HC Sierre in Switzerland before returning to France where he has been the head coach of the Bordeaux Boxers since 2016.

“After more than 15 years with the national teams, French hockey can thank [Dave Henderson and Pierre Pousse] for their faithfulness and dedication,” French Ice Hockey Federation President Luc Tardif said.

“After 11 consecutive years at the elite Worlds, that’s a long-time record for Dave Henderson, who leaves for retirement after his last competition and a new cycle opens for Les Bleus. After meetings in spring, the board has approved the decision to nominate Philippe Bozon at the helm of the French national team as of the upcoming season.”

Bozon still has a contract in Bordeaux and the three parties involved found an agreement that will allow him to coach both teams during the upcoming season.