Brits look to the future 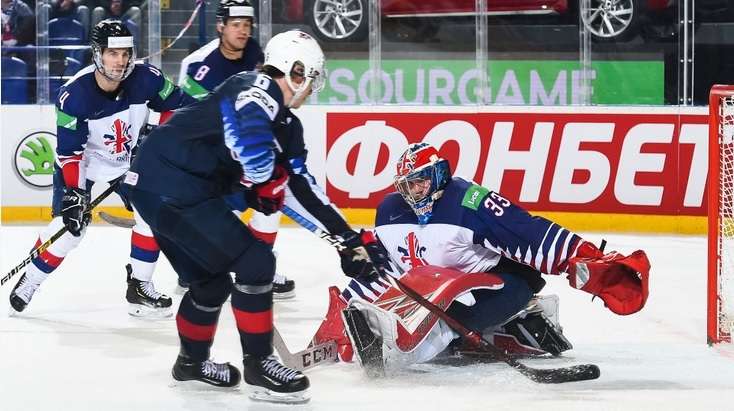 It’s been a difficult season for British hockey. While the country’s more prominent sports have been able to continue playing behind closed doors thanks to TV and sponsorship deals, the Elite League was unable to start. At lower levels, the enforced closure of indoor arenas for much of the past 12 months halted opportunities for individual on-ice practice. Several players sought opportunities in Europe, others were out of action until Britain’s domestic leagues were able to organise mini-tournaments funded by selling access to broadcast streams. These abbreviated competitions at least gave a chance for most players to get some game time in preparation for the trip to Latvia.

Since the roster was announced at the end of April, Team GB has gathered in Coventry for a training camp. However, there have been no warm-up games and the team has not played together in competition since February 2020’s Olympic Qualification tournament in Nottingham. Head coach Pete Russell was not involved at that stage, as he was competing in the DEL2 play-offs with Freiburg. And the mastermind of Britain’s climb to the Elite pool will not be going to Latvia, with his assistants Corey Neilson and Adam Keefe taking charge.

With several new faces on the team, plus recalls for other players who did not feature in Slovakia two years ago, the British roster in Riga is built with an eye on the future as well as the current championship.

In 2019, Ben Bowns was the star of the show for GB, coping admirably with an onerous workload and giving his team the chance to snatch that vital victory over France. Despite expectations that he might move overseas, he remained with Cardiff for another season and was, once again, the winningest Elite League goalie in the abortive 2019/20 campaign. This season began in Graz after a move to the EBEL, but injury slowed his progress. The 30-year-old was back home in time to backstop Nottingham Panthers to victory in the four-team Elite Series in spring and should keep his #1 spot on Pete Russell’s team in Riga. Another Panther, Jackson Whistle, returns after playing the understudy in Slovakia and there’s a call-up for 24-year-old Jordan Hedley, who played for Russell at Milton Keynes Lightning and most recently featured for Coventry Blaze.

It’s a new-look defensive unit for the Brits in Latvia. Long-serving blue liner Mark Richardson is the most notable absentee. The 34-year-old had been in every senior national squad since 2005, clocking up 72 appearances at various levels of the World Championship. Stephen Lee, another long-serving D-man, also misses out this time, while Tim Billingsley – who made his international debut at the 2019 Worlds – has not played at all this season. The team’s lynchpin, Ben O’Connor, is also short of game time after his appearances were limited to a spell with Sheffield Steeldogs in a pre-Christmas behind-closed-doors series set up by the second-tier NIHL. However, the 32-year-old keeps his place on the roster.

Three players will get their first taste of IIHF play as David Clements (26), Jordan Tetlow (23) and Sam Jones (23) get the call, part of Britain’s bid to use this tournament to develop a roster for 2022. There’s also a recall for Mark Garside, who last played for his country in the successful Division IB campaign of 2017. Paul Swindlehurst shrugged off an injury concern to complete the roster after coming through the Elite Series without any problems.

Scoring goals was a big problem from Britain in 2019. True, leading scorer Mike Hammond (4+0) outscored Alexander Ovechkin (2+1), but the team managed just nine goals in seven games, four of them in that overtime survival showdown against France. Hammond is back this time, as are the experienced Robert Dowd and Ben Davies, who potted that vital overtime tally to keep GB in the top division. Elsewhere, though, new faces are charged with bolstering British firepower in Latvia.

Lewis Hook and Ciaran Long are the new faces on offence. Hook, 24, has seen his profile steadily rise in recent seasons with some impressive Elite League performances for Belfast. Now, along with Liam Kirk, once of Peterborough Petes, and Sam Duggan, who played several seasons in Orebro’s youth system, he’s part of a trio of prospects tasked with turning potential into points as Britain looks to nurture a new generation.

Long’s story is rather different. Aged 30, this is his first international call-up. He was close to making the 2019 roster after posting 60 (25+35) points in 60 games for Manchester Storm in that season’s Elite League, a return that saw him named British player of the year in the import-heavy national championship. However, a move to Belfast saw his productivity drop in 2019/20 before he returned to his prolific best in Manchester during the Elite Series.

Brendan Connolly returns to the team after making his GB debut in last February’s Olympic Qualification tournament. The Alberta native was part of Alaska’s ECHL-winning team back in 2014 before acquiring British eligibility via seasons in Belfast, Glasgow and Sheffield. This year he divided his time between ECHL and Elite Series action.

Some familiar names are making way. Robert Farmer, the man who came up with the clutch goal in Budapest to earn GB promotion to the top flight, then struck again during that fightback win in Kosice, is absent this time. He hasn’t played since leaving Lausitzer Fuchse in December. In addition, Britain’s record scorer Colin Shields retired at the end of the 2018/19 season. Joey Lewis is another absentee from the 2019 roster.

Less than a week before the start of the tournament, Britain was surprised by news that Pete Russell would not joining the team in Riga. The 46-year-old has been away from his family for nine months while coaching in Germany’s DEL2, and felt that it would be wrong to jump straight on a plane after coming home.

“I came home and just spending time with my daughter, it become apparent it would be tough for me to go away again straight away,” he said. “To come back after nine months and leave two days later would be pretty heartless.”

In Russell’s absence, his assistants from the 2019 World Championship in Slovakia step up to the top job. Corey Neilson, who was also coaching in the DEL2 last with Lausitzer Fuchse, and Adam Keefe of the Belfast Giants are taking charge of the team.

In a normal season, GB would be a massive underdog at this level. Despite the heart-warming finish to the 2019 campaign in Kosice, this was a team that suffered some heavy beatings on its return to the Elite Pool after a 25-year absence. And the pandemic has not been kind to British hockey: the country’s rinks have been largely closed since March 2020, the Elite League season was cancelled and belatedly replaced with a series of behind-closed-doors games to help players shake off some of the rust that accumulated during a long, enforced lay-off from competitive action. An opening game against a Russian team selected from guys with a full season of NHL or KHL action behind them could hardly be a greater challenge.

On the positive side, there is no relegation this year, so the Brits have something of a free hit in Riga. And the expanded 28-man roster presents a rare opportunity to give precious international experience to emerging youngsters without worrying too much about immediate results. Thus, GB will look to strike a balance between proving that it can compete with its immediate rivals at the lower end of the Group A table and laying the foundations for another successful survival bid in Finland 12 months from now.