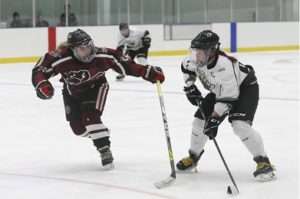 Growing up in the Czech Republic Veronika Bucifalova had a dream of coming to Canada to play hockey, so when she was 15 she made a decision to leave home and join the Ontario Hockey Academy.

Because of that move she’s now a member of the RDC Queens.

“I wanted to improve my hockey as hockey at home isn’t a good level for girls,” explained the 19-year-old forward. “I had a dream of playing in Canada as Canada is the hockey place.

“And I knew how to speak English so that was nice.”

In fact she’s fluent in Czech and English and understands German, French and Russian.

“It’s awesome to speak several languages as you meet so many great people. I have friends all over the world.”

Last season she moved to Switzerland and joined the Neuchatal Hockey Academy.

“Mainly I wanted to take a year off and make some money,” she explained.

This year she was ready to return to Canada, although she didn’t know much about Red Deer.

However, her coach in Ontario gave her Queens head coach Kelly Coulter’s contact number and the rest is history.

“A friend of mine, through connections when I was in Grande Prairie, was coaching in Ontario and he helped make contact,” explained Coulter. “I didn’t know much about Veronika, but I’m certainly happy we made the connection.

“She’s very skilled, has a passion for the game, has an excellent attitude and is a great teammate,” said Coulter.

“She has excellent hands, has great vision and can take a pass on her forehand or backhand and make a quick pass. She also protects the puck and plays a gritty game.

“She’s already a great addition and will be for years to come.”

With a quick release Bucifalova has shown she can score, but enjoys passing.

“I love to see my teammates celebrating a goal,” she said. “It’s a great feeling when you play as a team.”

“I think that helped as I got a complete perspective of the ice and helped me as a player,” she said. “I wanted to be a goalie, but my dad didn’t want me to.”

She does play goal for her inline team. She also plays ball hockey for the Czech national team, finishing third in the open division and second in the U20 world finals.

“It helps prepare me for hockey with the running and ball handling,” she added.

She first got into women’s hockey when she was 12 and even played with a men’s U18 team for a season, scoring 10 goals and 11 assists in 12 games.

“That helped me a lot in my career, but I still have a lot to learn. I’m a rookie here and will work hard to get better.”

Veronika is listed at five-foot-two and is solid on her skates.

In only four exhibition games you can see the skill Bucifalova brings to the Alberta Colleges Athletic Conference squad.

“We already can see each other and we’re already getting better and better,” she said.

As for the competition, she’s impressed.

“I have a friend who plays at NAIT and she told me about the league. Other than that I didn’t know much about it. But it’s fast with good game plans … I didn’t expect it to be this good.”

Veronika is taking kinesiology as she “wanted to have something to do with sports and to help people.

“I hope to be here for a few years and keep pushing myself every day to get better.”

“I saw pictures, but this is awesome. Much better than the facilities we have at home.”