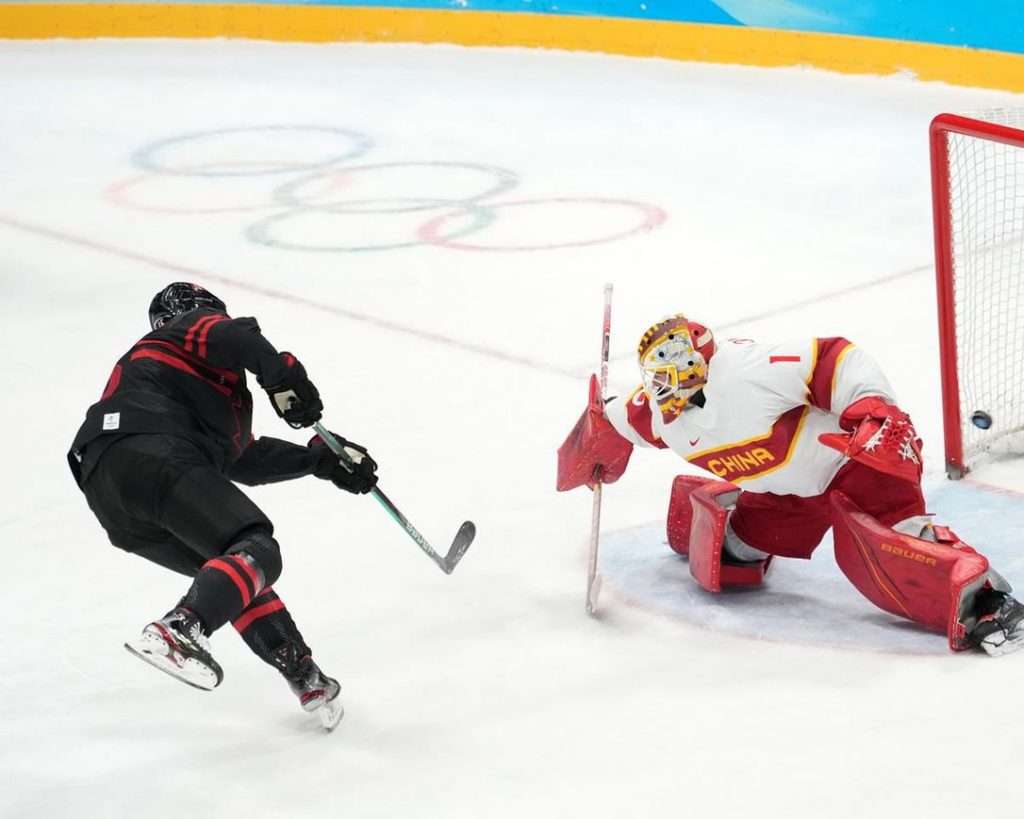 By Joshua Clipperton – The Canadian Press

Adam Tambellini had two goals, including one on a penalty shot, to go along with three assists as Canada survived an early scare Tuesday to beat China 7-2 in the qualification round of the men’s hockey tournament at the Beijing Olympics.

Jordan Weal, with two goals and an assist; Eric Staal and Jack McBain, with a goal and an assist each; and Eric O’Dell provided the rest of the offence for the Canadians, who got 27 saves from Matt Tomkins. Maxim Noreau added three assists.

Cory Kane scored twice for China. Jeremy Smith stopped 15 shots for the hosts in the first period before injuring his left leg. Paris O’Brien made 23 saves in relief for the Chinese, who went winless in four games and were outscored a combined 23-4 in the program’s first Games.

The Canadian roster of non-NHLers, which beat the Chinese 5-0 on Sunday in the round-robin finale and are the No. 5 seed after finishing second in Group A behind the United States, will now take on Sweden in Wednesday’s quarterfinals.

They’ll need to be a whole lot better if Canada’s going to play for a medal in Beijing.

In other qualification-round matchups, Slovakia beat Germany 4-0, Denmark topped Latvia 3-2, and Switzerland got past the Czech Republic 4-2.

Slovakia will take on the U.S. in the quarters, while Denmark faces off against the Russian Olympic Committee, and Finland meets Switzerland.

China’s team at the 2022 Winter Olympics was composed of Kunlun Red Star, a Beijing-based KHL club that finished last this season. Of the country’s 25 players, 18 were born or grew up in North America, including 11 with ties to Canada, while one is Russian.

Vancouver native and former NHL winger Brandon Yip, who has Chinese heritage through three of his four grandparents, served as the team’s captain. But others like Smith and Jake Chelios, the son of Hall of Famer Chris Chelios, had no ties to the country before signing contracts with Kunlun.

The International Ice Hockey Federation, which contemplated replacing China with Norway because of competitive imbalance, ruled players in that category met residency requirements despite the fact Kunlun relocated to the Moscow area because of the COVID-19 pandemic.

Tomkins started a second straight game for Canada, while Edward Pasquale, who got the nod in the first two contests, served as the backup.

Devon Levi, the MVP of the 2021 world junior hockey championship putting up eye-popping numbers in the NCAA this season, was once again in street clothes after dressing for the first time in China as Tomkins’ understudy Sunday.

The Canadians opened with a great first shift, but were on their heels after that. Tomkins was forced to make a save on a Tyler Wong breakaway and a Spencer Foo penalty shot after he was slashed by Morgan Ellis.

Canada settled down and went up 1-0 at 6:57 when Weal scored on a power play after Tambellini hit the post.

China got into more penalty trouble, and Weal, who played for head coach Claude Julien with the Montreal Canadiens, buried another on a 5-on-3 man advantage at 9:55.

China got back within one at 15:32 when Cory Kane stole the puck from an under-pressure Owen Power – the No. 1 pick at the 2021 NHL draft by the Buffalo Sabres – and roofed a backhand on Tomkins.

The Canadian goaltender stopped Foo, a native of St. Albert, Alta., on a couple of shots on a power play before disaster struck for China at the other end in the period’s dying seconds.

Smith, who played 10 games with the Colorado Avalanche in 2016-17, stretched to make a save and crumpled to the ice in agony. The American-born netminder had to be helped off without putting any weight on his left leg inside a quiet National Indoor Stadium.

That opened the door for O’Brien, originally from Coquitlam, B.C., to step into the spotlight a second time after stopping 39 shots in Canada’s 5-0 victory Sunday.

The 21-year-old made some nice saves following the intermission, but was fooled by a weak Tambellini one-timer on another power play that ticked off Chelios in front at 6:36.

The son of former Edmonton Oilers general manager Steve Tambellini was then hooked on a break by Chelios, and buried the ensuing penalty shot low on O’Brien at 8:39.

O’Dell stretched the lead to 5-1 at 12:05 by deflecting a Jason Demers point shot.

China got a 5-on-3 man advantage for a full two minutes late in the second when Ellis was assessed a major for elbowing and Tyler Wotherspoon then went off for holding. Kane, a native of Irvine, Calif., banged home a loose puck on a scramble to give China a little life with 59 seconds left in the period.

Tomkins had to be sharp on a Yip chance and the followup rebound nine minutes into the third, but China didn’t really threaten from there before Staal and McBain scored late as Canada advanced in unconvincing fashion.

This report by The Canadian Press was first published Feb. 15, 2022.