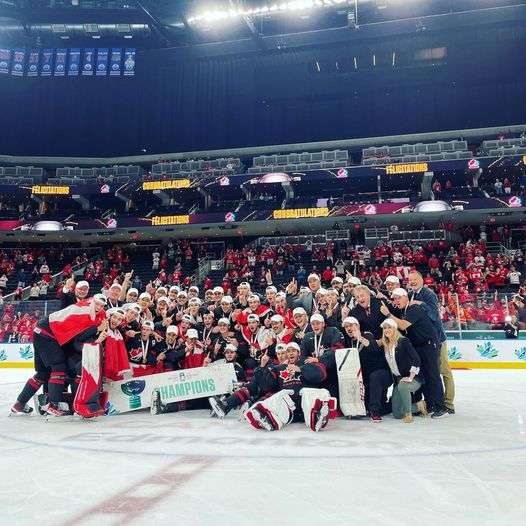 Team Canada players celebrate a goal in the 3-2 gold-medal game win against Finland.

Kent Johnson knocked in a loose puck at 3:20 of overtime to give Canada a 3-2 win over Finland and take the gold medal at the 2022 World Junior Championship. It capped the wildest three-on-three imaginable, one that included great saves by both goalies. But the biggest save came from Canada’s captain, tournament MVP, and leading scorer, Mason McTavish, who swept a puck off his goal line to keep play alive and allow Johnson to score soon after.

Logan Stankoven toe-dragged the puck in front of the Finnish goal and was stoned by Juha Jatkola, but the puck bounced free and Johnson smacked it in, sending the raucous crowd of 13,327 into a frenzy. Finland had taken the game to overtime by rallying from 2-0 down with two goals in the third.

Canada finished the tournament with a perfect record, seven wins without a loss, including an earlier 6-3 win over the Finns during the preliminary round. They have now won their record 19th all-time gold medals at the World Juniors. The win also marks the 15th time in 16 hostings that Canada has earned a medal, the lone exception coming in 2019. For Finland, they take silver, their fifth U20 medal since 2014.

The win is especially sweet for coach Dave Cameron, who was behind the bench in 2011 when Canada lost a 5-3 heart-breaker in the gold-medal game that year against Russia after leading 3-0 after two periods.

Dylan Garand was the winning goalie and finished the tournament with a 6-0 record. McTavish led all players in the game with 26:50 of ice time, including 1:55 of the 3:20 in the OT.

At the other end, Juha Jatkola was sensational in the Finnish goal, the only reason the game went to an extra session.

Backed by the biggest, loudest, and most raucous crowd of the tournament, Canada came out guns a-blazin’, getting the puck deep, hitting every white sweater in sight, and getting pucks on the net. All Finland could do was withstand the barrage and hope it wouldn’t last 60 minutes. Wave after wave attacked Juha Jatkola’s net, and he made some fine saves while his nervous mates tried to adjust.

But before they did, Canada took the lead thanks to McTavish. He drove around the goal and fired a quick shot. Jatkola made the save, but the puck dropped at the feet of Joshua Roy, and he smacked it in before defender Aleksi Heimosalmi could check him.

That goal came at 11:18, by which time Finland had yet to register a shot on goal. They finally did half a minute later, but soon after that, the McTavish-Roy combination almost clicked again. This time the captain fired a pass from the corner to Roy alone in front, but Jatkola made the save on the deke.

Finland skated their way into the game and got a few pucks on Dylan Garand, the most dangerous off the stick of Roni Hirvonen, but the goalie was perfectly positioned to take the shot to the midsection.

Finland had every right to feel pretty good heading to the dressing room, down a single goal in a period it was overwhelmed, but Canada reversed their opponenets’ happy feelings quickly in the middle period. Coming in on the rush, William Dufur fired a bullet past Jatkola just 41 seconds after the faceoff to make it 2-0.

That set off a series of chances both ways. Kasper Simontaival made an expert tip of a Joel Mattaa shot, but Garand stuck out the right pad just in time for the beautiful save. Johnson then had a long breakaway but was stoned by Jatkola.

Canada then had a whopping five power plays intermittently created by their intensity and pressure in the Finland end. They had plenty of possession and some good chances, but although they didn’t add to their lead virtually the rest of the period passed in the Finland end again as a result.

That failure to score with all those power plays became a problem early in the third when the Finns got their first goal of the night. It started when Dufour lost his stick and went off on a change, leaving Canada down a skater for a precious couple of seconds. Heimosalmi got the puck and fired a quick shot through traffic that beat Garand at 4:09 and changed the complexion of the game entirely.

The Finns nearly tied the game seconds later, but Garand made a fine stop on Sami Helenius, and then Tyson Foerster had an empty net only to shoot into Jatkola’s glove, the best save of the night by far. Finland responded with dominating play that eventually resulted in the tying goal.

They were relentless in the Canada end, just as the hosts were in the opening period, and tied the game after more pressure induced a turnover. Topi Niemela spotted Joakim Kemell to the back side and fired a pass across, and Kemell wired a one-timer in to make it 2-2 at 10:46.

Canada acquired a sixth power play, but before much happened it incurred its first penalty of the night to negate the advantage. And then Finland got another penalty that went to video review. In the end, it all went for naught and teams headed to the dressing room for a full intermission before playing 20 minutes of three-on-three unlimited overtime.

It didn’t last long, but every second was thrilling. Junior hockey might not be a summer sport on a reguar basis, but for one night, well, it was a dream.