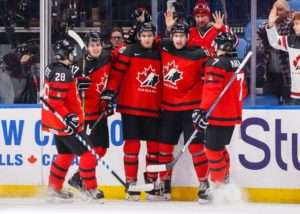 Canada is off to the gold medal game at the 2018 World Juniors thanks to a monstrous 7-2 victory over the Czech Republic on Thursday evening in Buffalo.

The first period was very intense, with both teams trading quality scoring chances at a higher rate than the two previous games at KeyBank on Monday. 5:55 in the first, the Czechs took the surprise 1-0 lead after Martin Necas fed Filip Zadina in front. Zadina, a potential top five pick at the NHL Draft this year, scored on a beautiful wrist shot goal after sending it over Carter Hart’s glove, putting the Czechs up by one early.

But Canada wouldn’t leave the first period without a pair of goals. At 15:05 on the power play, Cale Clague set up Sam Steel to the left of the Czech net, who fired a one-timer past Josef Korenar to make it 1-1. Three minutes later, on Canada’s next man advantage, Drake Batheron would tip in Cale Makar’s point shot to put Canada up in front in a game where they were dominating puck battles early on.

Batherson would come alive in the second, scoring his sixth and seventh goals of the tournament to complete the hat-trick. At 27:48 on the power play, Batherson made Radim Salda pay for taking a penalty when he sent in a shot off of a Makar feed past Korenar, putting up Canada by two.

After Maxime Comtois and Jordan Kyrou both scored after the halfway point in the game, Batherson, Canada’s fourth line winger, would complete the hat-trick after taking the puck off of Michael McLeod and skating in, beating Korenar blocker side to cap off one of the biggest periods of his career and to give Canada the 6-1 lead.

Canada wasn’t done. At 5:17 in the third, Boris Katchouk scored after taking Robert Thomas’ pass and making new Czech netminder Jakub Skarek look silly with a great shot, giving Canada the 7-1 lead. Zadina would score one more goal to give him seven in the tournament before the game was over, but Canada did enough damage early on to give Canada the victory to advance.

For the third time in four years, Canada will look for the gold medal at the World Juniors when they take on Sweden at 8:00 PM. Canada has won gold in three tournaments in the United States, but they did lose the last time it was in Buffalo back in 2011 to Russia. Still, with 16 goals in two games in the playoff round, Canada looks strong against Sweden, a team that has never beaten Canada in the final game.

The Czech Republic are guaranteed to have their best finish since 2005 when the team last won bronze. Since then, the Czechs have failed to medal, with their last gold medal dating back to 2000. They’ll face the United States at 4:00 PM, with the Americans looking to grab a medal on home ice after a championship in Montreal last year.