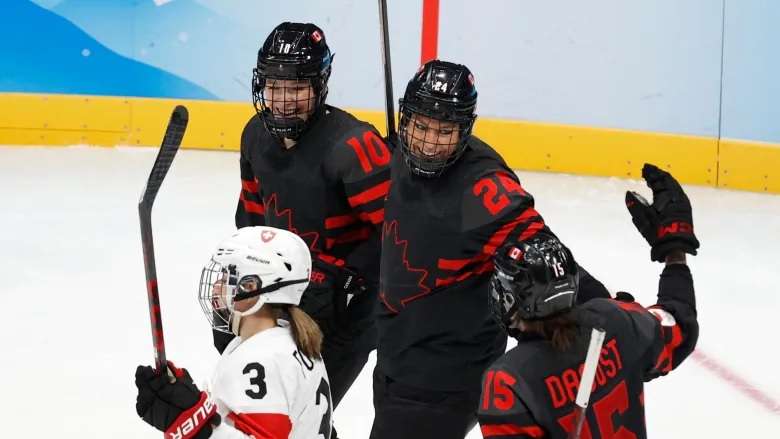 The Canadian women’s hockey team opened its Olympics with a 12-1 victory over Switzerland on Thursday in Beijing, but the win came with a cost.

Mélodie Daoust, a key part of Canada’s second line that combined for three goals in the first period, left the game and did not return following an awkward hit into the boards during the second period.

The 30-year-old, who won tournament MVP at the 2018 Olympics, appeared to favour her shoulder as she immediately exited to the dressing room following the collision.

The injury put a damper on Canada’s fast start which was led by Daoust’s linemate Sarah Fillier, the dynamic 21-year-old Olympic rookie.

“Just to step on that ice, see the [Olympic] rings, be in a building with Beijing 2022 written all over it and in this black jersey, it’s really cool,” Fillier told CBC Sports’ Kenzie Lalonde during the second intermission.

Fillier opened the scoring just over one minute into the game, knocking a rebound out of midair and into the back of the net for her first career Olympic goal at the Games.

The Georgetown, Ont., native was forced to wait an additional 10 minutes for confirmation as officials went to video review, but the goal ultimately stood as Canada’s icebreaker in Beijing.

Defender Renata Fast said the team was “pumped” for Fillier after she scored.

“Talk about making an entrance to the Olympics. To score on her first shift, to bat the puck out of the air, that is so skillful,” she said.

Fillier made sure to leave no doubt when she scored her second minutes later, ripping a slot shot over the blocker of Swiss goalie Andrea Braendli, who stopped 58 of a whopping 70 Canadian attempts on net.

“I circled out in front and the seas just seemed to part and I took my shot,” said Fillier, who completed her three-point period with the primary assist on linemate Natalie Spooner’s goal.

While Daoust was held off the scoresheet, she was on the ice for all three first-period goals as the “FillDaSpoon” line kept up the momentum it built at the world championships in August. Spooner finished the night with four points, including two goals and two assists.

Canada extended its lead over Switzerland with two goals in 15 seconds in the middle frame. First, Rebecca Johnston buried her own rebound to put Canada up 4-0 before Laura Stacey fired home her first of the tournament from below the goal line after an Ashton Bell dump-in caromed off the end boards.

Canada then capitalized on the power play stemming from the hit on Daoust as Spooner potted her second of the game. Blayre Turnbull scored her first of two goals soon after.

After Laura Stacey made it 8-0, Canada had more goals than Switzerland had shots on net (seven).

“I felt we were not ready and we have to learn from that,” Braendli said. “It was a hard game but it was fun to play against a bunch of great players.”

The Swiss quickly corrected that with a power play, testing Canadian goalie Ann-Renee Desbiens in the dying seconds of the frame. But the 27-year-old netminder was up to the task, sliding across her crease and stacking her pads to make her best save of the game.

Switzerland finally got on the board in the third period after Canadian forward Sarah Nurse was sent to the penalty box as forward Lara Stalder slid the puck under Desbiens’ pads and into the back of the net.

The Canadian goalie finished with 13 saves.

Turnbull, Bell, Erin Ambrose and Claire Thompson, who also added four assists, replied for the Canadians in the final frame.

The Swiss did manage to succeed in limiting Canadian captain Marie-Philip Poulin, who was held to a single assist. On Wednesday, Poulin, 30, was named Canada’s flag-bearer for the opening ceremony alongside short track speed skater Charles Hamelin.