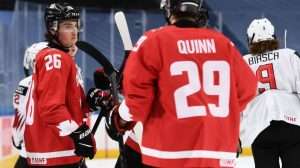 Canada’s Quinton Byfield led the way with two goals and four assists in a 10-0 victory over Switzerland at the 2021 World Juniors on Tuesday. The host nation has won three straight games, while the Swiss suffered their third straight loss.

Byfield, drafted second overall by the L.A. Kings this year, is one of six returning players from Canada’s 2020 gold-medal team, and his experience clearly paid off in this encounter.

Coach Andre Tourigny’s power play converted three times, as Canada just had too much skill, speed, and power for its opponents.

The Canadians face Finland on New Year’s Eve in a showdown for first place in Group A. The Finns won gold in 2019 and Canada topped the podium in 2020.

In order to make the quarter-finals, coach Marco Bayer’s Swiss boys must defeat Germany in regulation time in their final preliminary-round game on Wednesday. The Germans have two points after edging Slovakia 4-3 in overtime, and can finally ice a full roster after five more players were released from quarantine.

Switzerland, outscored 5-1 through their first two games in Edmonton, entered this game as monumental underdogs. In their 23 previous World Junior meetings with Canada, they secured just one point in a 3-2 shootout loss in Helsinki (29 December, 2015). The Swiss haven’t medaled since 1998’s bronze, and it seems unlikely their drought will end in Edmonton.

Canada got some important players back in the lineup. Defenceman Braden Schneider, after serving a one-game suspension for an illegal hit on Germany’s Jan-Luca Schumacher, slotted back in at the expense of Jordan Spence. Forward Dylan Holloway, who missed the 3-1 win over Slovakia with an upper-body injury, lined up alongside Connor McMichael and Dylan Cozens on the top line.

Philip Tomasino opened the scoring for Canada just 1:30 in. The versatile Oshawa Generals forward whipped a wicked wrister past Patenaude’s blocker from the top of the right faceoff circle for his fourth goal of the tournament.

The Canadians outshot Switzerland 14-3 in the first period, but failed to capitalize with a two-man advantage for 1:12 and took three minors of their own.

In the second period, the Canadian offence came alive. At 1:40, Cozens went to the front of the net and banged in a power-play rebound for his fourth of these World Juniors.

At 8:02, Jacob Pelletier made it 3-0 on the rush, picking up the rebound from Connor Zary’s shot off the end boards and firing a bad-angle shot past Patenaude on the stick side.

Converting another rebound, Ryan Suzuki put the defending champs up 4-0 at 13:44 on a man advantage that came after the hosts had hemmed in Switzerland with relentless pressure.

In the third period, the Canadians remained relentless.

Byfield was perfectly placed in front of Patenaude on the power play to tip Jamie Drysdale’s center point shot past the goalie for a 6-0 lead at 5:16. Less than three minutes later, Byfield finished off a sweet cross-ice feed from Jack Quinn.

Cole Perfetti made it 8-0 at 9:09 with a short-side snipe for his first goal of these World Juniors. Kaiden Guhle added another on a one-timer with 6:32 left, and Pelletier popped in a loose puck for his third of the tournament just over two minutes later.