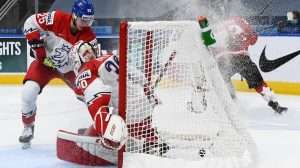 Goalie Nick Malik fails to stop a breakaway by Dylan Cozens, who opened the scoring for Canada in the first

Canada scored two goals in the first period en route to a disciplined 3-0 win over the Czech Republic to advance to the semi-finals on Monday. The loss eliminates the Czechs, who last won a medal at the U20 in 2005 (bronze).

Canada will now play Russia on Monday if the United States beats Slovakia in the late game (in which case, the U.S. would play Finland in the other semi), but if Slovakia wins then Canada will play the Slovaks (and Russia will play Finland).

Again it was Canada’s tenacity on the puck that was the difference, as well as some fine goaltending from Devon Levi, who was forced to turn in his best game of the tournament so far. He made 29 saves for his second shutout and has now allowed just two goals in his last four games.

Each team incurred just one minor penalty in a close-checking game in which open ice was scarce.

“I’m not sure if the game was close or not,” said Czech coach Karel Mlejnek. “The game turned in the first period when we allowed two quick goals which put us on the wrong side of the score. But we were strong mentally and kept fighting. We don’t only play defence, and we do try to score goals, but Canada played really well and didn’t give us many chances. We played to our strengths.”

Canada opened the scoring at 8:22 courtesy of an imaginative long-bomb flip pass from Connor McMichael. He lobbed the puck over three Czechs out to centre, where Dylan Cozens skated under it and went in alone. His show was stopped by Nick Malik, but it dribbled behind the goalie and over the line. For Cozens it was his tournament-leading 7th goal.

The Canadians made it 2-0 three minutes later on a similar play. This time acting captain Bo Byram held onto the puck as he moved laterally through the slot, and his shot also was initially stopped by Malik but trickled over the line. The goal came just as a Czech penalty expired, but it will go into the books as an even-strength marker.

Levi was unusually busy at the other end, making several fine stops during brief moments when the Czechs had some puck possession in the Canadian zone.

The Czechs, though, came out for the second determined to do what they do best—slow the game down, clog the area in front of their goal, and wait. They had plenty of waiting to do, though, because Canada played perfect defence. The middle 20 was plodding and replete with whistles, and truly each side had but one good scoring chance.

For Canada, Byram whizzed a shot off the crossbar midway through. And, for the Czechs, Martin Land skated hard down the right wing and nearly beat Levi to the far side, but the goalie squeezed his blocker arm and pad just in time.

The Czechs tried unsuccessfully to penetrate the Canadian end in the third. They got so desperate that coach Karel Mlejnek pulled Malik with five and a half minutes to go, hoping the man advantage would create some scoring. It didn’t.

Canada’s defence was more determined, and Connor McMichael created a turnover at centre ice to score the empty netter with under three minutes left. That sealed the Czechs’ fate once aod for all.