Canada explodes in 2nd for 5-0 win 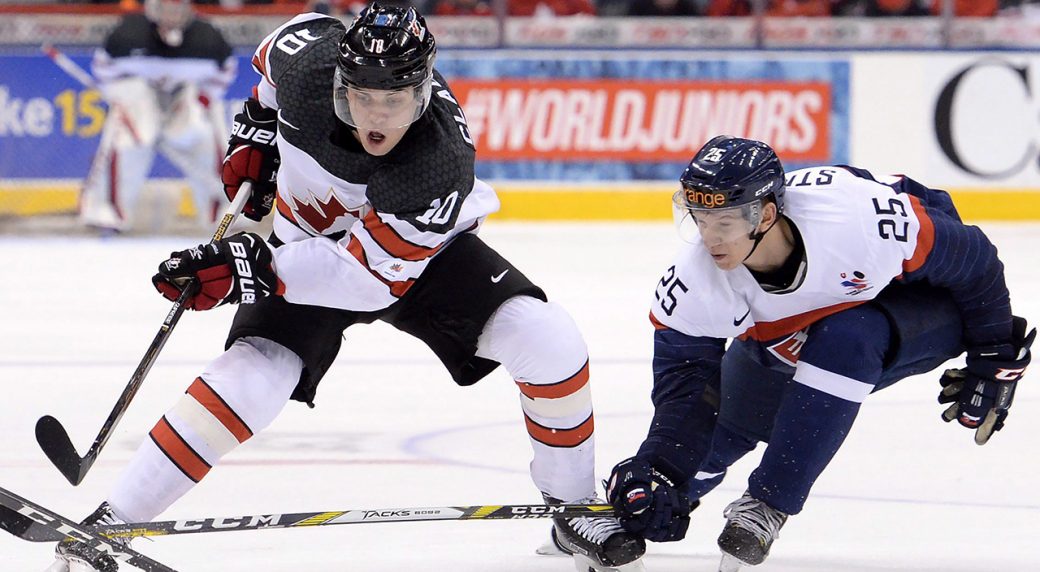 The winners got goals from five different players and points from a dozen skaters while Connor Ingram got the easiest shutout he’ll ever get, stopping just six harmless shots. Only when Russia limited Belarus to six shots on December 27, 2000, has a team had so few pucks on net in U20 history.

Playing in their first game of this year’s U20, the Slovaks might have been an equally physical team, but their inability to generate any offence cost them against what was an impressive Canadian attack. The final score flattered the Slovaks.

“This was our first game, and it was against the best team in the tournament,” said Slovak captain Erik Cernik, playing in his record-equalling fourth U20. “It was pretty hard. Canada plays offensively all the time, and that was too powerful for us tonight.”

“We’re a really fast team, and I think that wears other teams down,” noted Taylor Raddysh, one of the goalscorers. “We have to keep leading with our strengths.”

“Everyone knows the depth we have on this team,” added Michael McLeod, another scorer. “We have shut-down guys who have great scoring ability when they get the chance. This tournament is all about winning, and everyone buys in, even if they’re only playing two shifts a period.”

It wasn’t until 5:30 of the second period that the opening goal was posted on the scoreboard. It came courtesy of a nicely executed three-on-two rush. Tyson Jost carried the puck over the blue line, and as the defence closed in on him he dropped it back to Jeremy Lauzon, trailing on the play. Lauzon had a moment to take aim and ripped a shot over the shoulder of Adam Huska.

Less than six minutes later, Canada doubled its lead courtesy of a power play. This time it was a nice pass from behind the net by Pierre-Luc Dubois to Raddysh in front. Raddysh fired quickly over Huska’s glove, and the pro-Canadian crowd could breathe a sigh of relief.

Canada extended its lead to 3-0 at 12:37 off the draw. Lauzon’s point shot was tipped in front by Anthony Cirelli. By this point, Canada had as many goals in the game as the Slovaks had shots—three. Canada had 23 shots.

Canada got its second power-play marker of the period thanks to Thomas Chabot off a pass from Matt Barzal at 16:25, making the shots 30-3 in the process.

Michael McLeod added a fifth Canada goal in the third.

Canada has a day off before playing Latvia on Thursday while the Slovaks get back at it tomororw against the United States.

“We have a lot of big guys, so we have to play hard in the defensive zone,” Cernik added. “We have to be better, be stronger on the puck. You can’t win with six shots, and you can’t win giving up five goals.”