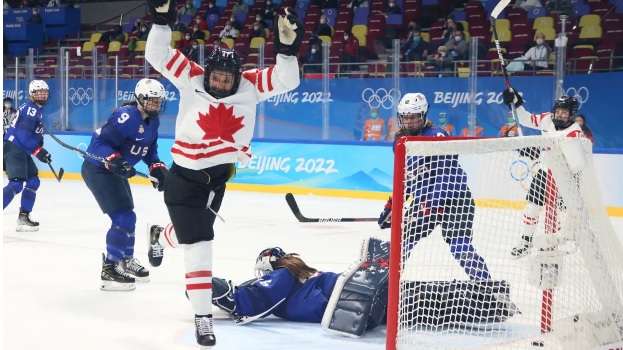 Deadlocked until the 14th minute, Canada’s Brianne Jenner broke the ice with assists by Sarah Fillier, and Marie-Philip Poulin.

The U.S. then scored twice as the game sparked into life in the second period.

Dani Cameranesi and Alex Carpenter gave the reigning champs a 2-1 lead, Amanda Kessel getting an assist for Carpenter to keep her point-a-game record alive.

But the lead wouldn’t last long as Brianne Jenner got her second of the game and fifth goal in Beijing just thirty seconds later.

Jamie Lee Rattray chipped in to put Canada a goal up 3-2.

Then there was a flashback for Marie-Philip Poulin as she was impeded on a breakaway, Cayla Barnes called for slashing, and ‘Captain Clutch’ had a penalty shot.

Against the goalie that saved her crucial shootout effort in the final at the PyeongChang 2018 Games four years ago when the U.S. took a 3-2 win.

This time Poulin made no mistake and Canada stepped off the ice with a 4-2 win and a huge boost on their quest to retake that Olympic gold.