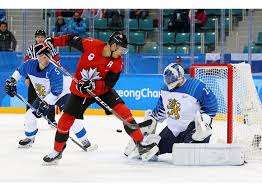 Canada needed just one goal to secure their place in the Olympic semifinals, beating Finland by a score of 1-0 on Wednesday evening in South Korea.

While there weren’t a whole lot of big offensive opportunities in the first 40 minutes, Canada lost one of their most important players after a collision early in the second. Ben Scrivens would have to leave after Eric O’Dell pushed Veli-Matti Savinainen into his netminder, with Scrivens getting hit in the shoulder area. He would hang around for another play before getting taken out in favour of Kevin Poulin, who got a shutout in his lone start against South Korea to end the opening round of the tournament.

The goalie switch seemed to make Canada play a much stronger, aggressive game, especially when it came to their offence. After taking just four shots in the opening period, Canada controlled possession with an 18-9 advantage, yet neither team figured out how to put the puck past either goalie.

Canada finally found a way to break the deadlock a minute into the third period. O’Dell did a good job of winning the faceoff back to Maxime Noreau at the point, and almost immediately, the former Colorado Avalanche prospect blew a wicked slap shot over the blocker arm of Mikko Koskinen and in to make it 1-0 for the two-time defending Olympic champions. It was the only goal that Canada needed in the game, with Poulin putting on a perfect performance in relief to lead Canada to the victory and to help them advance to the semifinals.

With the win, Canada will play for a medal for the third straight Olympic tournament, having won the past two gold medals in Vancouver and Sochi. Finland will fail to win a medal for just the third time since 1988, winning two silvers and four bronze medals in that time span.