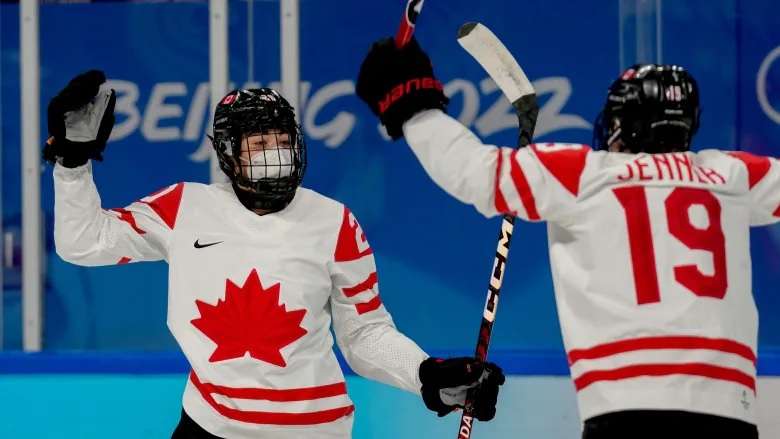 It appears as though nothing can slow down the Canadian women’s hockey team at the Beijing Olympics.

A lengthy delay to the start of Monday’s game against the Russian Olympic Committee (ROC) hardly threw off Canada as it comfortably skated to a 6-1 win to remain perfect in Beijing.

Canada (3-0) plays the United States (3-0) on Tuesday in its final game of the round robin with first place in Group A at stake. The ROC’s record dropped to 1-2 with the loss.

“It could be a big match. It’s exciting. We have a huge rivalry with the U.S. and we’ve been building our game in every game of this tournament,” Canadian forward Sarah Fillier said.

Team Canada hasn’t been seriously challenged in Beijing, winning all three of its games by a combined score of 29-3.

The Canadians went three-for-five on the power play and out-shot the Russians 49-12. Goalie Emerance Maschmeyer made 11 saves for the win in her first start of the tournament.

Monday’s contest was delayed for just over an hour due to safety concerns, as the ROC had not provided Canada with its COVID-19 test results. Six members of the ROC team were placed in isolation last week after testing positive. The game eventually started with players on both teams wearing masks when they finally took to the ice and the game began.

“I think we knew [the game] would go on. We were just waiting for [the ROC test] results to come back and once they came back we were comfortable,” Canadian forward Natalie Spooner said.

“Our coaches and medical staff were not going to put us in a situation where we would not feel safe.”

Russian blue-liner Anna Shibanova said her team wanted to play, but that “everything was unclear.”

“I didn’t expect this but we have said all year that nothing fazes us and this didn’t faze us. Our GM said we were wearing masks and we were like, ‘OK, let’s go win a game in masks.’ Not a big deal for us, we have been training a lot in these. Just another opportunity to prove that we could get the job done,” Canada’s Brianne Jenner said.

“Maybe you lost a puck or two at your feet, but we don’t want to use it as an excuse, we want to come out and play a good, solid game. We had a couple of shifts we definitely want back but mentally we did a really good job adapting.”

The delay didn’t slow down Canada in the least, as Sarah Nurse and Fillier scored just 20 seconds apart inside the first two and half minutes of the opening period. Nurse beat ROC goalie Daria Gredezen with a high blast from inside the circle, while Fillier scored off a feed from Renata Fast.

Canada successfully killed off three penalties after that, and Maschmeyer made a great save on a ROC breakaway to close out the period.

Nurse’s aggressive forechecking deep inside ROC’s zone forced a turnover, allowing Jamie Lee Rattray to score on the power play to put Canada up 3-0 at 7:45 of the second period. Spooner collected an assist on the play, giving her a tournament-leading 10 points.

Erin Ambrose made it 4-0 a few minutes later when she beat Gredezen with a wrist shot from the point through traffic.

ROC scored its first-ever goal against Canada at the Olympics later in the period, capitalizing on a turnover to go on a two-on-one rush before Anna Shokhina slipped a shot past Maschmeyer on the stick side and just inside the post.

“Team Canada and the United States are the two best teams in the world. To score against them is the perfect gift from this game for us,” said Russian forward Alexandra Vafina, who set up Shokhina’s goal.

Rebecca Johnston scored on the power play just 39 seconds into the third period off a tip-in to restore Canada’s four-goal advantage.

“This is all a bit new for me, this speed, this level. It was hard, but we still tried. We fought until the end, and all the girls did very well,” said Gredezen, who was replaced by Maria Sorkina for the second half of the game.

Canada added a third power play goal when Marie-Philip Poulin scored at 5:50 off a feed from Jenner to make it 6-1. It was the Canadian captain’s first goal of the tournament.

Fillier appeared to score her second goal of the game — and Canada’s fourth on the power play — but it was overturned for offside following a successful video challenge by the ROC.

Unlike the Canadian team, ROC players didn’t play with their masks on for the third period.

“The results came in and they were negative, and they said they were going to take their masks off. We figured we had them on for two periods so why not keep being extra safe for one period,” Spooner explained.