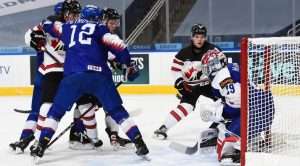 There were no 16 goals tonight for Canada, no tired or under-manned opponent, only a determined and persistent Slovakian team clearly bent on containing Canada’s speed come what may.

The result was a 3-1 win for Canada, good enough to keep the hosts atop Group A with a 2-0-0 record, ahead of Finland on goal differential, but it was no waltz in the park.

Despite the fine effort, the loss leaves Slovakia in third place with three points with a 1-0-1 record.

“After the game, we weren’t happy because we had so many opportunities to score the tying goal, but overall I think we did a really good job,” said Slovak forward Martin Chromiak.

The Canadians remain undefeated in U20 history against Slovakia, having won 14 of 15 games to go with a 0-0 tie at the 1999 tournament. Canada now has a day off to prepare for Switzerland on Tuesday while the Slovaks are back at it tomorrow night in a crucial game against Germany.

The goalies were the stars of this show, Devon Levi for Canada earning the win on his 19th birthday while Samuel Hlavaj was superb in the Slovak net.

“I want to say a big thank you to my teammates,” Hlavaj said. “They did a great job tonight. They blocked a lot of shots.”

It was clear early on that the Slovaks were intent on doing an effective job of keeping Canada to the outside and limiting good scoring chances in the danger areas, and although the hosts got the only goal of the first period the visitors were more than happy with their own play.

The one error came off a scramble in front. Hlavaj made two fine stops, but in the process slid out of the goal without controlling the puck. That allowed Jordan Spence the chance to snap the puck into the open cage at 4:08.

Spence is one of the team’s feel-good stories. He was a healthy scratch in the team’s first game and got into the lineup—his first in Team Canada togs—thanks to the one-game suspension to Braden Schneider.

Spence was born in Manly, Australia, and his parents, Adam and Kyoto, moved to Osaka, Japan, when their son was three. Jordan played his first hockey there for several years, and it wasn’t until he was 13 that the family moved to Cornwall, Prince Edward Island.

Despite not speaking English at first, Jordan flourished with a stick in his hand and skates under his feet. He was drafted last year 96th overall by the L.A. Kings and has played the last two seasons in the Q with the Moncton Wildcats, the most conventional part of his hockey journey to date.

“It was unfortunate for Schneider with the suspension today, but Mitch Love the assistant coach called me and said I was in, so obviously I was excited to play in my first game,” Spence enthused. “When I went out for my first shift, there was a loose puck in front of the net, and I just buried it. It was a surreal moment.”

The Slovaks were an even more determined group in the second period, choking Canadian rushes, pushing their opponents to the outside, and not giving an inch in front of Hlavaj. They had an early power play that didn’t click, but Canada had two late in the period and barely managed a shot on goal. Indeed, the finest chance of the middle 20 came with a few seconds remaining when Levi had to make a great pad save off Juraj Slafkovsky who was left alone in the slot.

Early in the third Hlavaj showed his worth again, this time robbing Connor McMichael on a clear shot from in close, frustrating the Canadians and keeping it a 1-0 game still. With seven minutes left, Hlavaj did it again to McMichael, and moments later the Slovaks drew a penalty.

But this time Levi showed his mettle, making three nice stops on the ensing power play. Moments later, captain Dylan Cozens stripped Slafkovsky of the puck inside the Canadian blue line and in one motion sent Philip Tomasino in alone. As he was chased by Samuel Knazko, Cozens roofed a shot over Hlavaj’s glove at 16:25 to give Canada a much-needed insurance goal.

That goal came in handy. At 18:36 and the net empty, Slovakia got to within one when Martin Chromiak wired a hard wrist shot past the glove of Levi.