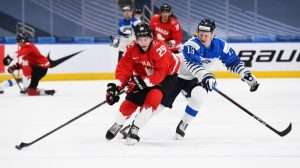 From the opening faceoff Canada attacked the Finns wave after wave, pursuing every puck with abandon and taking away the Finns’ time to think. The result was a thoroughly dominating 4-1 win.

Shots favored Canada by a wide margin, 40-19, and over four games Canada outshot its opponents 159-67.

The result means Canada, with a perfect 4-0 record, will take on the Czech Republic in one quarter-finals on Saturday, while the other three matchups are still contingent on the last game of today between Sweden and the United States.

“We didn’t play as well as our last game,” admitted Finnish defenceman Mikko Kokkonen. “Defensively, we didn’t get pucks out of our end early, so we spent too much time in our own end. We knew how they were going to play, but in the first two periods we didn’t play well. We have to be better.”

Canada’s pressure was a thing of beauty for its intensity. Dylan Cozens opened the scoring off the rush at 3:49 after a mistake by Eemil Viro at the Canada blue line. Viro tried to pinch off a turnover, but Cozens took the puck down the left wing on a three-on-one. Seeing few options on the pass, he took aim and wired a shot to the short side of Kari Piiroinen.

Jakob Pelletier had a great chance to make it 2-0 a little later on a clear break but was foiled by Piiroinen’s left pad. All the same, Canada drew the only two penalties of the period and outshot the Finns 17-1 in their most dominant period of the tournament.

Nothing changed in the second. Canada doubled its lead at 6:54 after incredible pressure and several shots, the final blow coming when Pelletier’s point-black shot bounced off Dylan Holloway and in.

Six minutes later, after another sequence of intense pressure, they made it 3-0. This time it was a Bowen Byram point shot that bounced around in front where Peyton Krebs, back to the goal, smacked the puck between his legs and in.

Canada made its first mistake of the night early in the third when Cozens took the team’s first penalty of the game deep in the Finland end. The Finns capitalized. The goal came off the stick of 16-year-old Brad Lambert whose shot went off the shaft of Thomas Hartley and over Levi’s glove.

Canada withstood the Finnish confidence, however, and Cozens added his second of the night with an empty netter as Finland tried to tie the game. That goal was his tournament-leading sixth and he now has eleven points, also tops