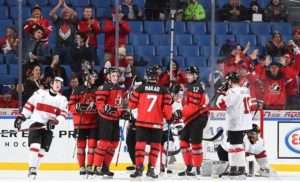 Canada has advanced to the semifinals at the World Juniors following a convincing 8-2 win over Switzerland on Tuesday.

It only took 48 seconds for Canada to score on their first shot. Anaheim Ducks prospect Maxime Comtois waited for Brett Howden to get into a proper position to take a pass. Howden was able to unleash a one-timer past Philip Wuthrich, putting Canada up 1-0 early.

Before the period was half over, Canada found themselves leading 2-0. Cale Makar, Canada’s only blueliner with a goal in the tournament despite being their seventh defenceman, stepped up in a big way with his third goal of the tournament, beating Wuthrich high glove to double up Canada’s advantage.

Wuthrich made a couple of big saves early, but Canada was able to take the 3-0 lead with 7:54 to play in the first. Drake Batherson would get the rebound on the play, putting Canada up by three heading into the first break.

The Swiss would get one in the second period, giving them a bit of hope. Early in the period, Dario Rohrbach tipped a shot from the point, with the puck hitting Dante Fabbro’s skate before it landed in the net.

But that wouldn’t spark anything out of the Swiss, who trailed 6-1 after 40 minutes of play. Batherson would score his second and his stick would be in Jordan Kyrou’s possession for his goal, only to have Conor Timmins finish off the explosive second period for Canada.

Halfway through the period, the Swiss scored shorthanded. Axel Simic broke free from a scramble at the blueline and ripped a shot past Carter Hart blocker side, making it 6-2. Comtois and Dillion Dube would score before the game was over, however, giving Canada the 8-2 victory in the second quarterfinal game of the tournament.

Canada will meet up with the Czech Republic at 8:00PM on Thursday, taking on a team that hasn’t made it past the quarterfinals since 2005.