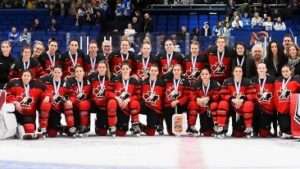 It might be the consolation prize, but it’s still a prize. Canada earned its first IIHF Ice Hockey Women’s World Championship bronze medal ever with a 7-0 win over Russia in Espoo on Sunday.

The Canadians will need time to fully assess what went wrong for them at this tournament. They played solid hockey and came second in Group A, but then suffered a dramatic 4-2 semi-final loss to the fired-up host Finns on Saturday. Never before has a Women’s Worlds concluded without a Canada-U.S. showdown for gold.

Instead, it’s the U.S. versus Finland in the final.

“It’s definitely not the medal that we came here to get, but I mean, even just participating at the World Championship and coming home with a medal is a huge honour,” said rookie Canadian defender Jaime Bourbonnais. “It was a great game today, and I thought we stuck together, even though we had a tough loss last night.”

Canada hasn’t won the Women’s Worlds since now-assistant coach Caroline Ouellette scored the 5-4 overtime winner against the U.S. in the 2012 gold medal game. That’s a long drought for the country that invented hockey. Only seven players from 2012 returned with this year’s team.

“Today, we had to try to have that energy and find ways to bring it, even when it’s those tough games that you really didn’t want to be playing in,” said Spooner. “I think we found a way and we brought it.”

The outmatched Russians failed in their bid to capture their fourth Women’s Worlds medal. The previous three medals were all bronze (2001, 2013, 2016). An inability to clamp down defensively like the Finns – historically their main competition for bronze – or even the Japanese – who limited the powerful Americans to a 4-0 quarter-final win – stung coach Alexei Chistyakov’s skillful players.

“You see the score,” said Russia’s Alexandra Vafina. “The gap is big and we just need to work harder to get it equal at least. It’s sad that we got the same mistakes which we did before in the regular games. That’s probably the saddest thing, because we need to learn from each game. We’re still learning from this one. It’s a tough lesson, but what else can we do? Just keep going and don’t give up. Still work hard and practice hard.”

An old Canadian adage came to mind in regard to Russia’s performance: “You miss 100 percent of the shots you don’t take” (Wayne Gretzky). The Russians were outshot 41-6 at Metro Areena. The single-game tournament record for the fewest shots on goal by a team in one game is 2, shared by Kazakhstan (in a 13-0 loss to Canada on 3 April, 2005) and Switzerland (in a 7-1 loss to the U.S. on 6 April, 2008).

Canadian hockey fans can recall occasions when their men’s team wasn’t able to bring its best in the battle for third place due to a “gold or bust mentality,” from the 3-2 loss to Finland at the 1998 Olympics in Japan to the 4-1 defeat against the U.S. at the 2018 Worlds in Denmark. However, that wasn’t going to be a problem for coach Perry Pearn’s troops.”At times in this tournament, I think we played extremely well to the point where we could challenge the U.S. in a gold-medal game, if we do the things we have to do,” said Pearn. “The flipside of that was last night we saw a game [versus Finland] where we got under pressure a little bit and we reverted right back to the old way of playing.”

Both Russia and Canada started the same netminders as in Canada’s 5-1 round-robin win: Genevieve Lacasse and Nadezhda Morozova. It was just Lacasse’s second start here, and she got her first career Women’s Worlds shutout. The 29-year-old Montreal native, who first played for Canada at the 2015 tournament in Sweden, backstopped Canada to a 2-1 group stage win over the U.S. at last year’s Olympics.

The Canadians kept the Russians virtually pinned in their zone from the get-go. At 6:08, Spooner, who scored a hat trick in the 5-1 round-robin win over Russia, grabbed the puck in the corner to Morozova’s left and circled the net to open the scoring on a wraparound. It was the veteran power forward’s sixth goal of these Women’s Worlds

Spooner, who became the first player to win both an Olympic gold medal and a CWHL Clarkson Cup with the Toronto Furies in the same year (2014), also converted two wraparounds on Morozova in the round-robin game.

Post-game, Spooner reflected on the sudden demise of the CWHL, which officially shuts down on 1 May: “I felt like our league was going so well. Is there a bigger picture to this? Obviously we want something better. We want one league. We want what we deserve as female hockey players. I think that there’s obviously a lot of questions and I’m not even sure they’ll get answered. But hopefully if we’re united and we stand strong, we can get what we deserve and make something that has never been around for women’s hockey. “

Bourbonnais made it 2-0 at 15:31 with a nice, rising slapshot from just outside the right faceoff circle.

“It was a great feeling,” said Bourbonnais. “It was a great pass from Sarah Nurse. Just playing on this team is amazing. It’s been a dream of mine since I was little. So to be able to score was a surreal feeling.”

Top Canadian blueliner Laura Fortino saw time at forward in the absence of Blayre Turnbull, who was injured in the loss to Finland. At the intermission, Turnbull, scratched top goalie Shannon Szabados, and injured captain Marie-Philip Poulin were all seen walking down from the stands to support their teammates in the Canadian dressing room.

In the second period, the Canadian target practice continued. At 9:38, Johnston caught Morozova flat-footed with her quick five-hole shot from the left faceoff circle to put Canada up 3-0.

The game then witnessed a litany of sloppy penalties, mostly to Russia. However, Canada neglected to extend its lead with the power play in the second period.

At 3:09 of the third, Gabel capitalized on a giveaway by the Russia netminder to make it 4-0. The 21-year-old has been a bright spot for Team Canada in Finland.

“We now have what I would call a legitimate natural goalscorer,” said Pearn.

Rattray got Canada’s first power play goal of the evening at 8:13 on a video-reviewed deflection. Fortino, unfortunately, hobbled off after getting tangled up in a collision with an opponent, and stayed off. At least her teammates had the game well in hand.

“Coming into the game, we definitely wanted to hold ourselves accountable to do the little things and have our habits,” said Spooner. “Because that’s what’s going to win us games.”

Ambrose swooped in from the point to collect a loose puck and roof it home for another power play marker and a 6-0 edge at 14:21. And Gabel scored again on a breakaway less than a minute later, tying her with Spooner for the team lead in goals (six). Russia yanked Morozova in favor of Anna Prugova to close out the game.

“We’re a tight group and this is probably one of the tightest Team Canadas I’ve ever been a part of,” said Ambrose. “So I’m really happy we were able to stand on that line and hear our anthem. Not the colour we wanted, but it’s stll a proud moment to hear your anthem at the end of the day.”

Overall, there are some positive indications for the Russians. While they clearly have a long way to go before they can compete effectively with the North Americans, their program has not regressed. Russia has now come fifth or better at eight of the last nine Women’s Worlds.

More investment, ice time, coaching, and general prioritization of women’s hockey could spur improved results in the future for a country that produces some of the world’s most talented male players. We’ll wait and see what happens when Russia comes to Canada for the 2020 IIHF Ice Hockey Women’s World Championship in Halifax and Truro, Nova Scotia.

“We need more young girls to recruit so we can feel the competition between us,” Vafina said. “Then we can grow. We need to practice and keep in the back of our mind that there’s somebody else who’s better, and you have to do every day better than yesterday, you know? Work needs to be done in every field.”