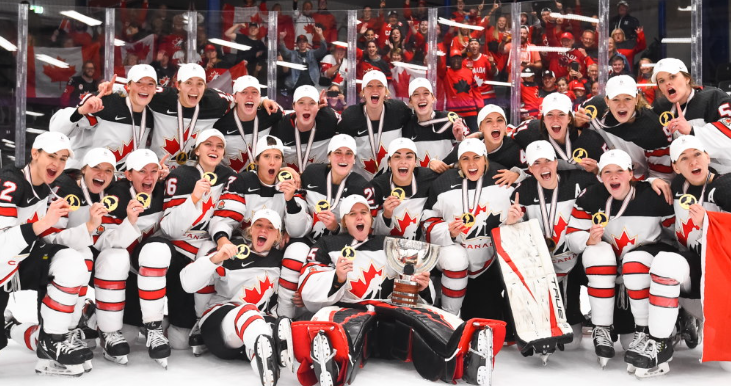 Brianne Jenner scored both of Canada’s goals and Ann-Renee Desbiens saved the gold in the dying seconds, giving Canada their third straight major gold with a 2-1 victory over the United States. It comes after the 2021 Women’s Worlds last August and Olympic gold in Beijing this past February.

With Nicole Hensley on the bench for a sixth sttacker for the final two and a half minutes, the Americans did everything but tie the game.

“I think as a group, we came out and found a different way to win the championship,” said Canadian captain Marie-Philip Poulin. “We’re all aware we weren’t producing the numbers at the Olympics, but tonight we did it by blocking shots, killing penalties, the power play. We had to find other ways to win, and Ann-Renee made a couple of saves to get the win.”

“I think our best two games were probably the last two games that we played,” Jenner added, “and that’s what you want to do in a tournament. It wasn’t smooth, it looked a lot different than our Olympics win and our last World Championship win, but I think we’re really reassured that even when things aren’t smooth, we can find different ways to win, and we battled it out tonight.”

The Americans had won all six previous games this year and scored a tournament-best 52 goals, but tonight they were stymied by a team defence Canada brought to the ice to stifle their high-flying offence. Canada lost the preliminary-round game between the nations decisively, 5-2, but coach Troy Ryan put together a game plan that kept top scorer Taylor Heise off the score sheet, prevented all-time scorer Hilary Knight from increasing her goals total, and nullified the U.S.’s defence from contributing to the offence.

“I loved the way we played,” said incoming American coach John Wroblewski. “I thought that we came out with a game plan that we executed. Each line was valuable ini trying to wear down a veteran team that was mobile. I thought we came out and did that as diligently as we possibly could. What happened tonight, giving them three power plays in a row, was very difficult, very unfortunate. Their goalie didn’t give up a lot in terms of second opportunities. We had some unbelievable chances, only her pad on the ice. We didn’t find a way to convert those. I thought our goaltender was outstanding. There were a couple of great shots by Jenner to maybe surprise her, and that was it.”

U.S. captain Kendall Coyne Schfield echose her coach’s words. “I think played a heck of a hockey game, and we ran out of time at the end. Sometimes it goes that way, but I thought we played a great game. Not the result we deserved. I believe we’re headed in the right direction. I thought we’ve played some of our best hockey in a long time this past week in Denmark. A lot to be proud of, a lot to learn, a lot to build on to move forward as a group.”

The game started as tentatively and nervously as any between these rivals. The first period was marked by a series of scrums in the corner, but as the referees shouted, “move it!” the players on both sides were hesitant to do anything that might produce and advantage for their opponent.

Canada could have had a lead based on the fact that they had the only two power plays, but their play with the extra skater produced no decent scoring chances in those advantageous four minutes. On the other hand, the Americans might well have scored first because Canada was guilty of countless giveaways in their own end, one blind pass after another to the middle.

But as the saying goes, the player who makes a bad giveaway is the best defender, trying to atone for an error. And so, despite the gifted passes, the U.S. produced few good chances of their own. In the end, the opening 20 minutes produced only seven shots, five to Canada.

By far, though, the best chance was one that didn’t count as a shot. Hilary Knight made a little pass to Alex Carpenter at the Canada blue line, and she moved in and fired a hard shot off the crossbar.

Both coaches let their troops loose in the second, producing the kind of hockey fans have grown accustomed to. Scrums were fewer, and Canada cleaned up its passing. In truth, Canada dominated the period and scored two of the three goals in an eventful 20 minutes.

Early on, Sarah Nurse showed a flash of speed to get around Megan Keller, but Hensley made the important save. Brianne Jenner, who had only one goal in six games coming in, then scored both goals for Canada in quick succession. The first came when she took a nice pass off the boards from Marie-Philip Poulin and tore down the left side past Lee Stecklein, firing a low shot from a bad angle that eluded the American goalie at 9:30.

Just 84 seconds later, Jenner was at it again. She scored on the power play from virtually the same spot, except this was a bullet snap shot high over Hensley’s glove.

“I saw a lot of traffic, and I saw that part of the net open. It happened in a split second, it was just a quick reaction,” Jenner said of what turned out to be the gold-medal-winning goal.

Sarah Fillier had a monster chance to make it 3-0, but she was stoned by Hensley and took a slashing penalty on the goalie as she made the save. A 3-0 lead would have been huge, but instead it was 2-0 with a U.S. five-on-four.

Nothing came of that, but the Americans got another power play late in the period, and on this they capitalized. Amanda Kessel found Abby Roque to the back side of the play, and Roque snapped it in with just 21 seconds left in the period, sending the teams to the dressing room with a Canadian lead but some American confidence from the late goal.

The U.S. came out to start the third with nothing but pressure, determined to tie the game. They had a great chance when Lacey Eden had the empty net and Desbiens down, but she moved the puck from backhand to forehand, and Desbiens got a pad out to make the save of the tournament.

A little later, Jincy Dunne snapped one of the crossbar, and Canada was on its heels. Desbiens mishandled a simple puck, leaving Hilary Knight with an empty net, but the goalie made the save and tripped Knight in the process, drawing a penalty. Desbiens was sensational on the ensuing power play, making three key saves.

Canada hung on the rest of the way, and Desbiens saved the day at the end. Canada wins gold.

“It never gets old being able to stand on the blue line and sing your national anthem and have a gold medal wrapped around your neck,” Sarah Nurse said, “but I think today was really special just being able to have our family there. The last few years have been hard for a lot of people, and so the fact that our families can be here in Denmark, they’re coming on the ice and celebrating with us, it’s like the icing on top of the cake. We’re very very grateful.”