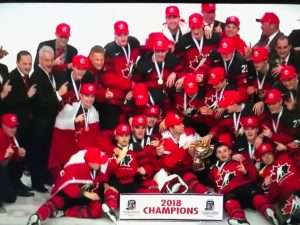 Canada has won the 2018 World Juniors in Buffalo, New York after Tyler Steenbergen scored with time running out, giving Canada the 3-1 win over Sweden.

The game was by far the most intense, crazy game of the tournament, with both teams getting tremendous scoring opportunities. Canada thought they scored early in the first when Dillon Dube knocked the puck past Filip Gustavsson on the scramble, but the whistle had gone just in the nick of time for Sweden for the goal to be disallowed.

But Dube didn’t mind, scoring a goal early in the second to end Gustavsson’s shutout and give Canada the lead. At 1:49 in the second, Dube broke the ice after Jordan Kyrou made a pass past top draft prospect Rasmus Dahlin in the slot. Dube would then use the extra room to beat out Timothy Liljegren, who was applying some physical pressure, before sending it over Gustavsson in close, giving the team north of the border the advantage.

Sweden was the more aggressive team with the puck, and after scoring twice shorthanded against the Americans, they made it clear they weren’t to be messed with when it comes to special teams. Tim Soderlund would add to Sweden’s great tournament when he broke in on a rush and beat Carter Hart glove side, using a Canadian defenceman as a pick to create a bit of distraction on the way in.

Coming into the game, Tyler Steenbergen was the only Canadian forward to not score at some point. With 32 seconds played in the opening period, it didn’t look like he’d get the chance to change that. But with 1:40 left in the game, Steenbergen scored from the slot to score the biggest goal of his career, putting Canada up by one with time running out. Alex Formenton would score one more before the game was over on the empty net, securing the gold medal in front of nearly 18,000 people at the KeyBank Center in Buffalo.

With the win, Canada has taken gold for the first time since 2015 back in Toronto, while also taking their fourth gold in six tries in the United States, including the 2005 tournament with players like Patrice Bergeron and Sidney Crosby. Sweden has yet to beat Canada in five gold medal games, which includes back to back championships for Canada in 2008 and 2009.