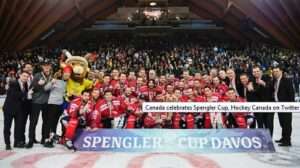 Canada has won the Spengler Cup for the fourth time in the past five years.

The national men’s hockey team defeated Ocelari Trinec  of the Czechia 4-0 in the final.

Dustin Jeffrey scored twice and added an assist to lead Canada past Ocelari Trinec on Tuesday afternoon in Davos, Switzerland.

Canada lost last year’s final in a shootout against KalPa Kuopio of Finland.