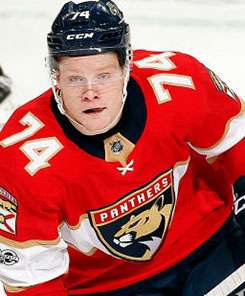 One dream has been put on hold. Another is about to begin.

A day after the Florida Panthers returned Owen Tippett to the Ontario Hockey League, the 10th overall pick in this year’s draft was back practising with the Mississauga Steelheads on Tuesday.

If he was bitter or disappointed, he didn’t show it. Instead, Tippett was already looking ahead to the next challenge: winning a spot on Canada’s roster for the world junior championship.

“I’ve dreamed about playing for Team Canada at the world juniors ever since I was a little kid, so to play in that tournament would be a really special feeling,” said the 18-year-old forward. “I obviously can take a lot back from what I learned there and implement it here.”

Tippett, who unexpectedly made Florida’s roster out of training camp, scored a goal and had 17 shots — only once did he fail to register a shot — in seven NHL games for the Panthers.

“What I like about him is he wants the puck and he wants it in critical situations,” GM Dale Tallon told Postmedia News in September. “I think his game is well suited to the pros.”

At times, Tippett looked like he might stick. He had seven shots in his NHL debut. On his goal, he showcased his speed when he grabbed a turnover and sprinted up the ice before converting on a give-and-go against John Gibson of the Anaheim Ducks. But he was in and out of Florida’s lineup; he averaged 11 minutes of ice time and watched nearly half the games from the press box.

At 18, Tippett needs to play so he can develop. That’s why he was sent back to junior on the same day the Edmonton Oilers returned 22nd-overall pick Kailer Yamamoto (no goals and three assists in nine games) to the Spokane Chiefs of the Western Hockey League.

“I’ve realized now it’s not as big of a jump as some people might say,” said Tippett. “Anyone who’s my age who gets to start out with an NHL club at the start of the year (has) a great experience. I obviously can take a lot back from what I learned there and implement it here.”

The hope now is that both players will represent their respective countries — Yamamoto is American — at the world junior championship, which begins in Buffalo over the Christmas holidays next month. For Canada, getting a player with NHL experience, even if it’s only seven games, is a benefit.

“I think they came back with tremendous confidence. That’s first and foremost,” Hockey Canada head scout Brad McEwen said in a phone interview from Swift Current, Sask., where he was watching the first leg of the Canada-Russia series.

“We’re always looking for offence and ways to produce offence. And (Tippett) can do that. We expect him to be part of the offence and certainly in the mix. But he has to prove it right away.”

While it appears no draft-eligible player will find his way onto Canada’s roster, McEwen is “crossing his fingers” that several players currently on NHL rosters will be made available. Some, such as Columbus forward Pierre-Luc Dubois and Montreal defenceman Victor Mete, are long shots. Others, like Colorado’s Tyson Jost and Samuel Girard, could be last-minute additions.

The biggest name out there is No. 2 overall pick Nolan Patrick, who has played nine games with Philadelphia, but has been out of the Philadelphia’s lineup since Oct. 24 with a head injury. Once healthy, the Flyers have to decide whether to keep Patrick past the 10-game threshold or return him to the WHL’s Brandon Wheat Kings.

Another question mark concerns Michael McLeod (12th overall, 2016). The Devils prospect tore his meniscus during a pre-season game and has been recovering from knee surgery ever since. It’s doubtful New Jersey will keep him around once he’s healthy.

“The information that we get is that his rehab is going real well and it’s getting close to the point where he’s going to get cleared,” McEwan said of McLeod, who had two goals and one assist in seven games for Canada at last year’s world juniors. “We’ll communicate with the Devils and see what’s in the plans. He would be a nice addition, having played last year and being a veteran guy.”

The Matt Duchene trade could affect whether Canada ends up with a couple of key players.

At one time, it looked like Jost (10th overall, 2016) might become available, since he was in and out of Colorado’s lineup and averaging only 13 minutes a game. But with Duchene gone from the Avalanche, Jost could see an increase in ice time moving forward. Another difficult assessment concerns Girard (47th overall, 2016), who looked like he would be loaned for the world juniors after getting demoted to Nashville’s AHL affiliate. But that was before he was traded to Colorado.

“Now that Samuel’s been traded, I don’t know what the plan is there, and that’s fine,” said McEwen, who is also keeping an eye on Mete’s declining minutes with the Canadiens. “He played a ton of minutes early and now it’s come down. For me, that’s not an indicator of whether we’re going to get him back or not. We’re just waiting and seeing where it all plays out.

“We prepare the names that we have now, and if those guys come back, it will be a bonus.”

HART FAVOURED TO START IN GOAL

Canada’s selection camp for the 2018 world junior championship is still a month away, but it appears Carter Hart has the inside track on the No. 1 goaltending position.

The 19-year-old, who is one of six potential returning players who won silver at last year’s tournament, posted a shutout in a 7-0 win Monday in the Canada-Russia super series in Moose Jaw, Sask. It was a good first step for the Philadelphia Flyers prospect, who had played sparingly this season because he had been sick with mono.

“I thought Carter Hart was really good,” said Hockey Canada head scout Brad McEwen. “Even though it was 7-0, he was great, which was great to see.”

Hart, who was selected 48th overall in the 2016 draft after being named CHL goalie of the year, is expected to battle Vancouver Canucks prospect Michael DiPietro for the starting job.