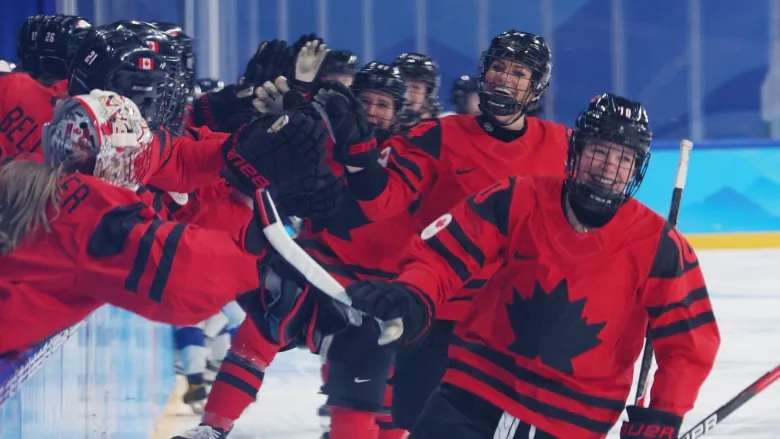 In her first Olympics, Canada’s Sarah Fillier is quickly proving she belongs.

The 21-year-old Georgetown, Ont., native scored twice, Sarah Nurse and Brianne Jenner each recorded hat tricks and the Canadian women’s hockey team stormed past Finland with an 11-1 victory on Saturday at the Wukesong Sports Centre in Beijing.

“It speaks to the depth on our team,” Fillier said. “We have a ton of skill and a ton of talent and we’re willing to score any way we can. … It’s really from everywhere on the ice and everyone on our team and it just speaks to our chemistry.”

For the second straight game, Fillier got the scoring started for the Canadians as part of a two-goal performance.

“I think when you score early it just deflates a team and when we just keep attacking it’s really hard to get one back on us and we can really play with them on their heels,” Fillier said.

Captain Marie-Philip Poulin was held without a goal for the second straight game, but did add three helpers. She appeared impressed by Fillier’s fast start to these Olympics.

“To see her score that first goal, it just makes us smile. It’s amazing to see her grow and every game she’s stepping up,” Poulin said.

Nurse, of Burlington, Ont., doubled Canada’s lead later in the first period, capitalizing on a Finnish turnover and firing a slap shot into the back of the net.

Finland answered near the end of the frame when defender Minnamari Tuominen sent a wrist shot from the blue line past Canadian goalie Ann-Renée Desbiens.

But Fillier, Nurse and Jenner made sure it never got closer than that.

Fillier added her second of the game in the middle frame, taking a pass from defender Renata Fast and tapping a backhand over Raisanen’s shoulder with her back turned toward the net.

The 27-year-old Nurse quickly followed suit with her second, finding herself open in the slot and firing a wrister home to extend Canada’s lead to 4-1.

Jenner, 30, then put the game out of hand with two of her own. First, she snuck a shot just underneath Raisanen’s pads. Then, the Toronto native piled on wduring a seemingly innocuous play where her backhand bounced off a Finnish player and into the net.

She later wired a wrister past Finnish backup goalie Anni Keisala, who replaced Raisanen in the third period, to complete the hat trick.

Nurse also converted her hat trick in the third period after depositing a beautiful cross-crease feed from defender Erin Ambrose.

The offensive explosion may have lifted some weight off Nurse’s back after she was held to just two assists in her Olympic tournament debut four years ago.

“A bunch of us looked up at one point and we saw that we had 10 goals. We didn’t even realize we had that many because we’re so focused on that next shift and being impactful and generating offence,” Nurse said.

Raisanen made 28 saves through two periods, while Keisala added nine in the final frame.

Desbiens replied with 28 stops of her own for Canada.

“It was a great team effort. Everyone’s just showing up shift after shift. We just keep putting it in and I think it’s a lot of pressure — we’re enjoying it, we just gotta keep going,” Poulin said