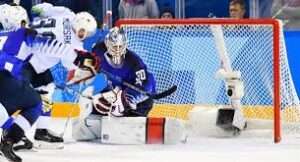 U.S. defenceman Matt Gilroy blocked Rok Ticar’s first attempt to send the puck cross-ice to Mursak, but not the second one, and the Slovenian captain beat U.S. goalie Ryan Zapolski to the stick side. It was Mursak’s second goal of the night.

“I’m happy I was able to score today and help the team, but I think the whole team showed a really good performance today,” said Mursak.

Slovenia surprised everyone at the 2014 Olympics by finishing seventh, and it looks like they’re planning to build on that history. This exciting upset was the first Slovenian win over the U.S. in Olympic history. The U.S. won 5-1 in Sochi in 2014.

“They came out hard, they came up with a little more fire,” said Greenway. “They were down 2-0 going into the third and we just didn’t find a way to finish the game “

Zapolski, who leads the KHL with nine shutouts for Jokerit, lost his goaltending duel with Slovenian starter Gasper Kroselj. Shots favored the U.S. 36-25.

“We can play with them,” said Gregorc. “It was no problem. We just said that we just need to stick together and just fight until the end.”

The Kwandong Hockey Centre crowd of 3,348 oohed and ahhed frequently during its first taste of Olympic men’s hockey on Wednesday night.

It’s the first time the U.S. has assembled an Olympic roster with a majority of European-based pros. This was a battle between two veteran teams with an average age of 30.

In a manner of speaking, neither side was able to “stick” to its system early on. First, Slovenian defenceman Luka Vidmar was penalized for playing with a broken stick, and then U.S. defenceman James Wisniewski was caught getting his stick up on Jan Urbas.

During the ensuing 4-on-4, a pinching Sabahudin Kovacevic had a wide-open net during a scramble in front of the U.S. net, but defenceman Noah Welch slid on his knees to block a sure goal, and Kovacevic cursed his luck as he skated away.

For a while, it seemed that Slovenia, which has just 136 registered male players, would struggle to keep up with the quicker, more aggressive, and deeper Americans.

“The best part of the beginning of the game was we were pursuing pucks, hunting pucks, and putting the D in tough situations,” said O’Neill.

The U.S. opened the scoring with 2:16 left in the first period. Hustling along the boards past Slovenian defenders, Garrett Roe centered the puck from behind the net, and it tipped off Miha Verlic’s outstretched stick to O’Neill, who roofed it.

O’Neill, who got two assists in 22 games for the New Jersey Devils in 2015-16 and now plays for Jokerit, is no relation to the former NHL executive of the same name.

At 12:57 of the second period, Greenway made it 2-0, as he raced to the crease and banged in a puck that deflected to him off O’Neill’s skate. at the Olympics. Greenway (Boston University), a 2017 World Junior champion, is the first African-American player to represent the U.S. at the Olympics.

“It was exciting to get my first one under my belt, but it would have been much better to get a win tonight,” Greenway said.

Loud-and-proud American supporters dressed in the Stars and Stripes chanted “USA!” early in the third period, but then it was the turn of the Slovenian fans in bright green.

Gregorc, a two-time Olympian who plays for HC Hradec Kralove, cut the deficit to 2-1 at 5:49. The defenceman stepped in off the right point to whiz a wrister through traffic past Zapolski’s blocker.

Slovenia came close to equalizing with U.S. captain Brian Gionta in the box for tripping. Verlic, parked on the doorstep, banged a rebound through Zapolski’s pads just wide of the post.

The Slovenes pulled their goalie for the extra attacker with a late faceoff in the U.S. end, and it paid off. With just 1:37 left, Mursak pivoted to whack the rebound from Gregorc’s point shot past Zapolski and tie the game.

“Hats off to them,” said O’Neill. “They played really well in the third period. They did a lot of things well that we were doing well in the first two periods. They kind of turned the momentum around there when they got that first goal and they didn’t let up.”

History suggests the Slovenes have plenty of reason for optimism in Korea.

After Slovenia defeated Austria 4-0 in its qualification playoff game in Sochi, superstar centre Anze Kopitar was asked to explain how his country could do so well with such a small pool of players. “We’ve got 25 really good ones,” replied Kopitar.

The Los Angeles Kings veteran, who led the playoffs in scoring during his 2012 and 2014 Stanley Cup runs, isn’t here – but he wasn’t even Slovenia’s scoring leader in 2014. That was forward Ziga Jeglic (4 points), who’s back for 2018. Kopitar was one of four players tied for second (3 points).

“Of course we can celebrate a little bit but we have a lot of games ahead of us,” Gregorc cautioned. Slovenia’s next game is Friday against the Olympic Athletes from Russia. The U.S. takes on Slovakia that day.

The U.S. last won gold in the 1980 “Miracle in Ice” in Lake Placid. However, it struggled in the four “non-NHL” Olympics after that, placing seventh in 1984 and 1988, fourth in 1992, and eighth in 1994. The Americans hope they can diverge from that pattern as they strive to honor the memory of longtime USA Hockey executive and two-time Olympian Jim Johannson, who passed away unexpectedly on 21 January.