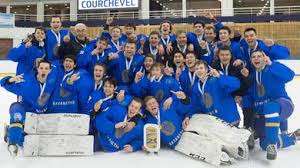 Every year, the Christmas season is one that plays host to a plethora of national teams in a number of tournaments across the globe. Rarely do these tournaments see as dominant a point-consuming winner as the 2018 IIHF Ice Hockey U20 World Championship Division I Group A, which has once again sweetened the holiday season for some, while giving a number of nation’s ice hockey programs plenty to think about in preparing for next year’s edition.

Spent in the lovely, snow-filled Meribel and Courchevel in France, a new champion has been crowned and it’s none other than the tournament’s most exotic geographical participant, Kazakhstan. This was concluded in astounding fashion as the Kazaks polished off host France 6-1 in the final game, allowing the team to go undefeated in collecting 13 of 15 possible points. Saturday’s victory, as well as gaining first place, was due in part to defenseman Valeri Orekhov, who led the way in putting an exclamation point on the top spot with three assists, allowing him to tie for the lead in tournament scoring with seven points.

This amount was also tallied by teammate Artur Gatiyatov, who proved to be Johnny on the spot at several junctures of the tournament. He also tied for the tournament’s lead in the plus-minus department with a +5. Clearly though, scoring over the five-game event was spread out across a number of shoulders. Another top point-getter was Nikita Nazarenko, who contributed four goals and two assists, despite often playing on a different line that Gatiyatov. All in all, 10 players accumulated two or more points.

The journey to first place experienced its first test when Kazakhstan required overtime to defeat eventual 3rd place Germany 3-2 in the first game of the tournament. The exact same path needed to be taken in their second game, having beaten eventual 2nd-place Latvia by the same score in overtime to set the pace. After that, the Kazaks completed one mission after another, defeating the promoted Hungary by a tight score of 5-3, Austria in a 3-2 thriller, and then host France 6-1 in the only game of the tournament that saw the promoted Kazakhstan really dominate their opponent over 60 minutes.

That elation was clearly evident throughout the arena, most especially noticed by the predominantly French spectators, once the siren had rung and Kazakhstan’s celebration began taking place.

After a very strong showing in 2016 followed by another respectable showing (and a bit of bad luck) in 2017, the Kazak program has achieved its goal and will be a part of the big show in 2019 when the world’s best juniors gather in Vancouver and Victoria in Canada’s western province of British Columbia. Home to a population of roughly 18 million inhabitants, the intentions and progress of the Kazak ice hockey program have become very clear in recent years thanks to the achievements of the U18 and U20 teams, both of which have performed strongly in the respective Division I tournaments in the U18 and U20 categories. Something that is reminding viewers of the type of progress that Belarus has enjoyed in recent years.

In a couple of weeks Belarus will be part of the 2018 IIHF World Junior Championship taking place in Buffalo, New York. That was made possible thanks to a convincing Division I tournament victory last December in Bremerhaven, Germany. Their journey took them from one B-town to another. And the Division I group serves as the stepping stone for every ambitious hockey nation that feels it should be duking things out with the world’s best. That’s now a step Kazakhstan will be experiencing for itself this time next year and will surely have all eyes on this year’s edition of the tournament, which will begin on 26th December.

It’s a tournament Kazakhstan’s hardest opponent, Latvia, is all too familiar with and one it desperately wants to be part of year for year.

A clear favourite heading into this December’s Division I Group A, the Latvian U20 national team was making a journey from North America to France, where their mission could only be to achieve direct re-qualification to the world’s top U20 division. To get back up, they’d have to beat recent Division I power Germany, ever-improving French and Kazakh teams, the grab bag Austrians, and a Hungarian team that has swiftly made its way up to Division I through some good grassroots development.

Only two years ago, this Latvian team had defeated some stiff competition in Vienna, Austria, to make its way up to the world’s elite. A 1-0 victory over Germany on the final day of the tournament allowed the Latvians, who had lost to Kazakhstan just 3-2 in overtime, to keep their hopes high, but alas, that one point lost to Kazakhstan on the second day of the tournament proved the difference on the final day.

German coach Christian Kunast perhaps said it best by stating, “We’ve once again come to see that this division won’t let you get away with even one bad day. At the end of the tournament, the team gaining promotion is the one that plays most consistently right from day one.”

A glance at the paths taken by Latvia and Germany at this tournament, much less that of Kazakhstan, which had it lost in overtime to either Germany or Latvia, would not have gained promotion when all was said and done, once again showed how tight the competition is at this level. Latvia missed out by one shootout loss and Germany’s loss of five possible points proved extremely bitter, considering each loss was by just one goal. A different hero here or there could have seen any of these three countries finish first.

“Our congrats go to Kazakhstan for gaining promotion,” stated German team manager Klaus Merk. “They played the best tournament, managing to do what was necessary when it was necessary, and rightfully earned first place in the standings.”

Differing a bit from previous years were the fates of Austria, France, and Hungary. Other than beating up each other, none of the three could make a dent against the tourney’s top three. Hungary’s one point came in OT against France, which at that juncture of the tournament seemed like quite the success. Nonetheless, the level of play in France and at this tournament was too much for Hungary, which still must be seen as an up and coming ice hockey nation.

Almost surprisingly, the host nation France didn’t have the tournament it expected. After a very strong appearance last December in Germany, where the team managed to feature the tournament’s top scorers (Gabin Ville and Bastien Maia with 12 and 10 points respectively) and really give the impression that it will be reckoned with for promotion this year, the team simply couldn’t come close to achieving the same level of success. This came as a bit of a surprise for several reasons.

The home-ice advantage was felt to give the team a big boost, especially after the men’s World Championships were successfully co-held in France just this past May. In addition, the team featured what many felt would be the tournament’s strongest player, Alexandre Texier, a 2017 2nd-round draft pick of the Columbus Blue Jackets who is currently taking a regular shift for KalPa in Finland’s top senior circuit, for whom he has scored eight goals in 30 games. After kicking off the tournament with three assists in France’s convincing 6-1 victory over Austria, he managed just one point over the next four games in which France garnered just two points and was shut out twice. His power outage was indicative of France’s 4th place finish in the tournament.

Another trend that has developed at the Division I level was once again confirmed, namely that nations of the former USSR not only were among the most competitive, but also posed the tournament’s champion for the third year running. This shouldn’t come as a surprise as each of Belarus, Kazakhstan and Latvia have a rich history with the sport, which is clearly the most popular team sport in Belarus and Latvia while being as much in several parts of Kazakhstan.

On the way down

As if the organizers knew this match-up might hold such relevance, the final day of the tournament included an Austro-Hungarian match-up that featured a do-or-die scenario with respect to relegation. The two nations of Austria and Hungary are not just deeply entwined from an historical standpoint, but each have teams playing in the EBEL, a multinational league that stretches across four Central European nations and organizes its own junior leagues. A great many of the players dotting the roster have come up through the junior programs fostered by EBEL participants and/or are currently playing in North America, Scandinavia or Switzerland.

Each having entered the game with no more than a single point, Austria managed to pull out a convincing 5-2 victory, which was one that the team celebrated with aplomb. Forward Marco Rossi looked like a man on a mission with two goals and four points, proving to be the difference like few individuals had been in a game thus far. Although this was certainly a bit of a damper in the program’s progress, ice hockey pundits continue to believe that Austria will start to have a higher impact on the international ice hockey scene at this level in the years to come.

For now, the nations of Germany, France, and Austria will watch the progress of Kazakhstan at the 2019 IIHF World Junior Championship while anxiously awaiting to see who will join them next winter after this year’s World Juniors in Buffalo. One thing they already know is that Norway will be rejoining them at next year’s Division I Group A tournament. To get there, Norway required a shootout victory to defeat Ukraine and then another in the final game to defeat Poland.

As such, things are getting tighter at the U20 level – something that every true ice hockey fan has to love to see.