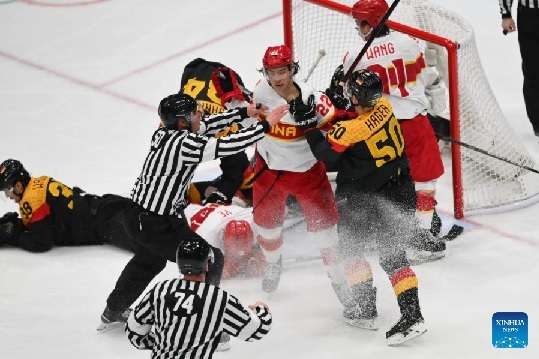 Fu Shuai (C) of China collides with Patrick Hager (R) of Germany during the ice hockey men’s preliminary round Group A match between China and Germany at National Indoor Stadium in Beijing, capital of China, Feb. 12, 2022.

The Germans scored two goals in the first period, and widened the lead to 3-0 at 24:41.

China’s forward Fu Shuai put the puck into the net in the last minute of the second period, the first ever goal for China’s men’s ice hockey team in the Olympic history, and then forward Wang Taile scored again in the 49th minute.

“I think it means a lot for China, the Chinese ice hockey team and the players,” head coach of China Ivano Zanatta said of the two goals.

“We had a lot of chances, and my boys played very hard,” he added.

“It’s pretty crazy, and the whole team’ efforts make it happen. It’s a huge honor to score and I’ll remember it for a long time. I think there are a lot of positives we take from tonight,” Fu said

Next games in Group A Germany 1-1  will face the Undefeated Americans while China 0-2 will take on Canada 1-1.