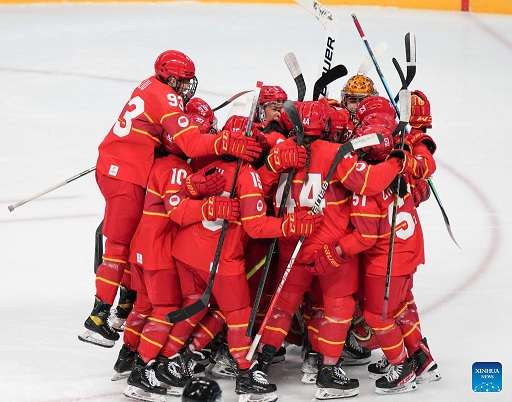 Athletes of China celebrate after the ice hockey women’s Group B match between China and Japan at Wukesong Sports Centre in Beijing,

China’s women’s ice hockey team defeated Japan 2-1 in a penalty shootout to claim its second win at the Beijing Winter Olympics on Sunday.

China offered waves of offense after the opening whistle, even with forward Zhang Mengying injured in the middle of the first period. But Akane Hosoyamada seized the opportunity to score at 18:02 on a powerplay, securing Japan’s 1-0 lead into the second period.

No more goals were scored until China’s Hu Baozhen equalized at the very beginning of the third period. The 1-1 deadlock ensued and saw the game head into the first overtime at Beijing 2022.

A dramatic moment arrived as a review was made after a China player moved the puck into the net with her body as she slipped, and the goal was ruled out.

During the penalty shootout, Japan failed to score, while Mi Le netted the winner to end the tightly contested match 2-1 in China’s favor.

“We expected a tight game. They came hard and it was a tough battle. We just could not finish,” said Japan head coach Yuji Iizuka.

Said China goalkeeper Zhou Jiaying, “For this game and last, I think the key is that we trust ourselves and fight hard.”

“We want to play more and we will be ready for tomorrow,” she added.

China is scheduled to face Sweden on Monday.