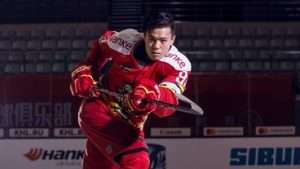 Zachary Yuen did not get to choose his heritage, but as one of ice hockey’s budding Chinese prospects the National Hockey League (NHL) is hoping will help grow the game in the Far East, he has embraced the added attention and duty to the motherland.

Yuen, 25, whose father is from Hong Kong and mother is from the Guangdong Province, was born in Vancouver (which is 43 per cent ethnically Chinese) and now plays for the Beijing-based Kunlun Red Stars, the only Chinese team in Russia’s Kontinental Hockey League.

Yuen, who was drafted by the Winnipeg Jets in 2011, chose the KHL over the typical American Hockey League route (which houses the NHL’s feeder teams) to help grow the game in China.

This, of course, has placed a particularly bright spot on Yuen as the NHL tries desperately to bring forth a Chinese superstar to reach a new audience overseas.

Yuen has featured in multiple media outlets since heading overseas including GQ China twice, the Financial Times and recently walked the catwalk at a fashion show in Shenzhen.

“I definitely feel like there is a lot more responsibility and pressure being a Chinese player because I feel I have a responsibility to be a good role model for all the kids in China who have interest in hockey,” he said.

The NHL is hoping all the games it has hosted in China and the cash it spent flying in marquee draws like Wayne Gretzky and Phil Esposito will be able to piggyback off the country’s commitment to winter sports ahead of the 2022 Beijing Winter Olympics.

State broadcaster CCTV has also televised a number of NHL regular season games and the play-offs hoping to entice more Chinese people to either play or take interest in the game.

China has literally built hundreds of ice rinks across the country and the International Ice Hockey Federation reports the game has grown from about 1,000 local players in 2017 to 12,000 today.

Yuen, who is in his third year in the KHL and is a much-coveted left-handed defenceman, is a pitch-perfect spokesperson given he is trilingual. He said even though he was born and raised in Vancouver, he was raised in a fairly traditional Chinese family.

“For me being able to also speak Mandarin and Cantonese, I’m able to really keep in touch and communicate with all the Chinese fans, and I feel like it’s a very important part to growing the sport in China.”

Yuen added his first season (2016-17) in the KHL was tough, noting it was like having “continuous jetlag”, but now he feels much more at home and knows all the Russian cities. Right now the Red Stars have five Canada-born players and eight China-born players on their roster. The team is currently 10th in the East Division of the KHL with five wins and nine losses in 14 games. Yuen has only played six games this season due to injury.

One of the points of upcoming contention between the NHL and China ahead of 2022 will be whether the league sends its players. The NHL bucked the trend in 2018 by announcing its players would stay put which boiled down to a money issue with the International Olympic Committee.

Yuen said it is “still too early to say” whether the NHL will allow its players to go to Beijing in 2022. If Yuen is still playing in the KHL it will be a no-brainer as he will definitely suit up, but if he is playing for an NHL team, the decision will be out of his hands.

“For me, I would love to be a part of Team China for the Olympics. I want to represent my mother country, and it’s definitely something I look forward to. So with regards to NHL participation in the Olympics I guess only time will tell.”