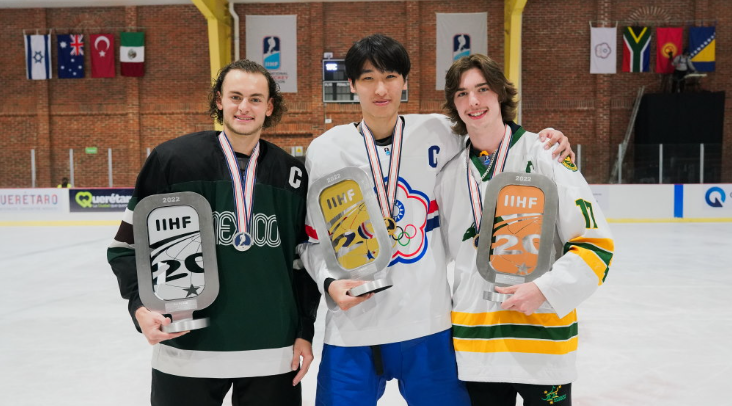 Chinese Taipei’s dramatic 5-4 overtime win over host Mexico at the U20 Division III Worlds sees it promoted for the first time in IIHF history.

On a 2-on-1 break, Mo Peng passed over to the 18-year-old sniper and he slammed a one-timer home at 2:19, throwing away his gloves and helmet in ecstasy. It was Chou’s tournament-leading tenth goal.

“After three years of the pandemic, winning this tournament is just unreal,” said Chou, who was named Best Forward. He also got the sudden-death winner in a 6-5 semi-final victory over Israel.

Under coach Chung-Yu Cheng, Chinese Taipei earns promotion to the Division II Group B in 2023. Meanwhile, Mexican coach Diego de la Garma’s troops will have to dream of what could have been, at least for now.

“I think we played a pretty well-rounded tournament with a lot of heart and second effort,” said de la Garma. “We didn’t lose a single game in regulation, which is always great. And yeah, at the end of the day, we came up a little bit short.”

Chinese Taipei, which debuted in IIHF U20 competition in 2010, has never advanced out of Division III before.

“This is a huge step forward,” Chou said. “We’ll keep developing our skills and our environment for hockey and strive for new goals.”

For this tournament, the Lakeside Ice Park was a great host venue and a change of pace from staging IIHF events in Mexico City. The recently constructed rink is situated just outside the state capital of Santiago de Queretaro in central Mexico. Festooned with the home country’s flags, the arena shook with cheers and chants on Saturday night from the adrenalized partisan crowd.

Mexico, which has iced U20 teams in IIHF events since 1997, peaked when it was promoted to Division II in 2010. Also under Diego de la Garma, Mexico finished last in Group A with five straight losses that year.

The first period started with a scrappy battle in all three zones, with little open ice. Mexico’s Max Rullan, who took the game’s first minor penalty, made amends at 8:42 with a shorthanded breakaway goal to open the scoring.

At 14:12 Alexander Valencia scored his team-leading fifth goal for coach Diego de la Garma’s team with the man advantage. This was particularly delightful for the locals since assists went to Valencia’s brothers Luis and Eduardo, and their roots are in the Queretaro area.

Chinese Taipei wasted no time in taking an early second-period lead. After Yo-Chen Lin potted his second goal of the night at 3:14, Zheng-Wei Li made it 3-2 with a snipe from the right faceoff circle at 3:31.

Undaunted, Ignacio Soto Borja got loose for a power play one-timer at 8:41 that made it 3-3. The 16-year-old defenceman fell to the ice and spread his arms in glee as his Mexican teammates rushed to him to celebrate. However, Chou struck back at 15:14 for a 4-3 edge.

In the third period, the Mexicans came out hungry as the crowd’s fervor hit new heights. They exerted great pressure around Hsiao’s cage during a mid-period man advantage with Yi-Kuan Lin in the box. With just 1:01 left in regulation, Soto Borja’s seeing-eye shot from the left point – with Payro pulled for the extra attacker – bulged the twine. It was a thrilling moment, even though the game ended in disappointment for the hosts.

“I think the people really enjoyed it,” de la Garma said. “There were a lot of people here that didn’t know anything about hockey. And they just came to see one game and then they bought tickets for the entire tournament. So I think for Queretaro and for Mexico, it’s going to be a huge step forward to develop hockey in new cities in our country.”

The gold medal game score was reminiscent of the preliminary round, where Chinese Taipei edged Mexico 6-5 in a shootout. The Asian victors understand the importance of simply persevering, as they hail from an island nation with just three indoor rinks.

“It’s really difficult for us to train,” said Cheng. “We have to train late at night and in limited hours. This is one of the difficulties we struggled with and overcame in the end. Now, after being promoted to Division II Group B, we want to win another championship and just keep going up.”

Due to the pandemic, it was the first time this tournament has taken place since 2020. This year’s eight-team edition was originally slated for 6 to 16 January, but got bumped to the end of July for health and safety reasons. Australia originally elected to pull out of the January tournament, but participated here.

In Saturday’s bronze medal game, Australia edged Israel 1-0 on a second-period power play goal by captain Ethan Hawes, who was named Best Defender. Israeli goalie Daniel Reiner was heroic in defeat as the Australians outshot his side 43-15. Between the Aussie pipes, Jeremy Friederich recorded his first shutout. Australia was coming off an excellent group stage with a 33-3 goal difference through three games, and lost narrowly to Mexico, 3-2, in the semi-finals.

In other notes from these U20 Division III Worlds, Kyrgyzstan returns home with good memories after upsetting Chinese Taipei 3-1 in the preliminary round and coming seventh. That win was the first ever for the Central Asian newcomer as it made its IIHF U20 debut this year.

Bosnia and Herzegovina, another first-timer, fared even better, falling 5-1 to Türkiye in the fifth-place game. South Africa, outscored 26-7 in the preliminary round, came eighth, as it also did in 2020.