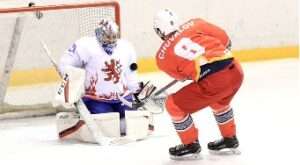 Kyrgyzstan progressed to the second round of pre-qualifying

By Michael Pavitt – In side the games

Chinese Taipei booked their place in the second round of pre-qualification for the Beijing 2022 Winter Olympic ice hockey tournament by topping their group in China.

Victories in their first two matches at the TUS Ice and Snow Park in Sanya saw Chinese Taipei move to the brink of advancing.

Chinese Taipei will now participate in Group L next month in the second stage of pre-qualification.

They will join Mexico, the Netherlands and hosts Spain in Barcelona.

Kyrgyzstan will also compete in the second round after winning Group N in Luxembourg.

Victory over the host nation ensured Kyrgyzstan of progression with a match to spare.

Kyrgyzstan will immediately turn their attentions to preparing for the second stage of qualification next month.

They will go up against Iceland, Israel and hosts Romania in Brasov.

Bulgaria, Croatia, Serbia and Turkey will contest the third group in Sisak.