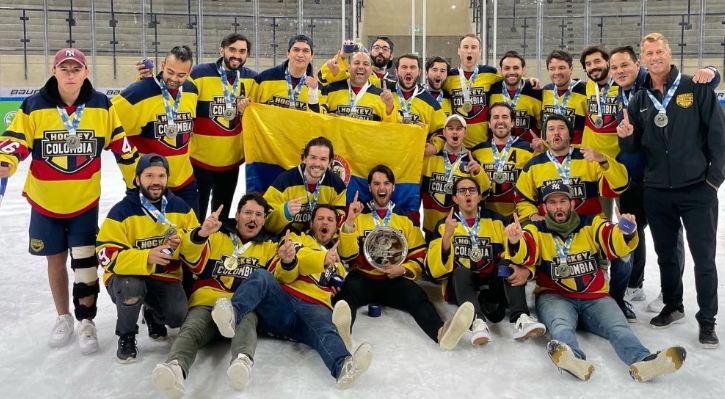 For a second time the ice rink in Fussen, Germany served as venue for the Development Cup. Celebrating its third edition, the tournament has been established to provide an international tournament for IIHF members that are not able to compete in the IIHF Ice Hockey World Championship program. It has become increasingly important for these countries, and their players, to be able to play competitive games to further their development.

With six participating countries – Algeria, Andorra, Colombia, Ireland, Liechtenstein and Portugal – this third edition of the Development Cup was the biggest and most successful since its inauguration in 2017. The first edition in Canillo, Andorra saw four participants –Ireland, Morocco, Portugal, and host Andorra. In 2018, North Macedonia joined returning countries Andorra, Ireland and Portugal for the second edition in Fussen, Germany.

The Corona pandemic intervened for any further action, thus the hiatus. But with six participating nations the tournament made a brilliant comeback much to the joy of the driving forces behind the event such as Irishman Aaron Guli and Adil El Farj, a Canadian with Moroccan roots.

What all participating countries have in common is that their ice hockey programs are quite small. Either because their countries are small, like microstates Andorra and Liechtenstein, or because ice hockey under IIHF rules is difficult for reasons related to ice rink infrastructure, such as the lack of full-size ice rinks. Of the six participants in Füssen, only Ireland had previous experience of participating in the IIHF Ice Hockey World Championship program. Interesting detail, Andorra boasts a nice regular IIHF ice rink (1,500 seats) in Canillo, where Spain organized the then IIHF Ice Hockey World Championship D-Pool in 1997.

While Andorra has its own ice rink, Liechtenstein, the other microstate participating in Füssen, hasn’t. Its players practise their ice hockey in neighboring countries Austria and Switzerland. Nor does Algeria. The players on its roster live in the diaspora and have Algerian roots and mainly developed their hockey skills abroad, like France or Great Britain. Unfortunately, Dundalk Ice Dome, the only regulation size Irish ice rink, closed a few years ago, in 2010. However, there is hope that a new ice rink will open in the future to give the program another boost. In the meantime, the Irish travel to neighbour Northern Ireland to hit the ice in Belfast. Portugal has had some temporary ice venues and developed its ice hockey program via inline hockey as did Colombia. However, the latter is making a lot of progress having participated several times in the Amerigol Cup in Florida winning the 2018 edition and recently participated in the Dallas Spring Classic, an event powered by NHL club Dallas Stars. In Fussen they showed their mastery of the game coming out on top with four wins and one tie winning the tournament.

Inspirer and organizer Guli, who is also president of the Irish Ice Hockey Association, is extremely satisfied with this third edition. “I conceived this tournament for national teams that for whatever reason cannot participate in the IIHF Ice Hockey World Championship program can still play the sport representing their respective countries on the international level and thus profile themselves as an ice hockey nation. The traditional ways of developing ice hockey don’t really work in these countries. The focus is on showing that these countries are involved in the sport of ice hockey and can use this event to promote the grassroots development of the sport in their country through their national senior men’s teams,” explains Guli.

“This edition was a challenge, obviously with Covid. There was a two-year lay-off. The 3rd edition was originally scheduled for October 2021, but with the Delta variant peaking in that period the decision was made to postpone it until now. But I think it is a sign of resilience by everyone because of Covid and the long gap that there is even more interest as we have grown from four to six teams, and we have also more interest from other men’s teams, and we are even in discussions with the IIHF in holding a women’s edition as well.”

At the upcoming IIHF Annual Congress Guli and his colleagues will have talks about the future. “We will be looking to take the 4th edition as the next step up. Every time we organize the Development Cup, we want to make it better every new edition. We were so pleased IIHF President Luc Tardif and General Secretary ad interim Gion Veraguth were present, as well as IIHF Council member and retiring German Ice Hockey Association President Franz Reindl. A sign the IIHF is committed to further support the Development Cup which will be massive for us. Mr. Tardif is a strong believer in development and him being present also sent a strong message to the participating teams.”

His colleague Adil El Farj agrees. “Seeing IIHF President Luc Tardif dropping the puck at the ceremonial face-off was huge, not only fur us organizers, but also for the participating nations. The IIHF President met with the Associate Members Working Group (which represents non-championship participants) to talk about the future and working on eligibility. It’s in our common interest that this tournament is more than just a competition, but also continues to focus on development. A Development Cup for women’s teams could be the next step to further improve the sport for associate members worldwide.”

For the Colombians this Development Cup couldn’t have been any better, claiming the victory as its first South American participant and writing ice hockey history. “It has been indeed a valuable experience this week,” confirms Daniel Fierro, president of the Colombian Ice Hockey Federation and player on the team. “Honestly, we didn’t know what to expect, as we had no clue about the strength of our opponents since we previously only played in tournaments on the American continent. Obviously, we are very happy in achieving the first place in this IIHF-sanctioned event. It is very important for us to show what Colombian ice hockey is capable of so one day we can participate in the IIHF World Championships.”

The Colombian Ice Hockey Federation develops its ice hockey program through inline hockey as there are currently no ice rinks in the South American country. And apparently this surrogate sport can help. “We play inline hockey, but we started playing this dryland variant with ice hockey rules, like offside and icing etc., to accustom our players once they hit the ice. Since we don’t have ice rinks in Colombia, we travel a few days prior of a tournament so we can practise a couple of times on the ice before the event starts. We were in Fussen, three days prior to the Development Cup to practise on the ice. It eases our players to make the transition from inline to ice. That was part of the success we had this week.”

The team in Fussen consisted of 22 players. “Twenty of them were Colombian born,” proudly states Daniel. “Two have Colombian roots, being born in Sweden and the USA. Something we are very proud of is the fact that all players play in Colombia today and a few had some experience playing ice hockey abroad in the States and Europe. So, we try to comply with the IIHF rules as we hope to bring this team to an IIHF Ice Hockey World Championship in the future. We are making steps towards that. This victory is a huge step for us. Showcasing our ice hockey skills outside the Americas was very important, especially towards our ministry of sports. A delegate of the ministry was present and saw what we can achieve. Hence, winning on the international scene is huge for us, so claiming the Development Cup was an enormous step forward to achieving a first ice rink in our country.”

It was the first time that Liechtenstein participated in the Development Cup. Previously its national team played only two international games versus Luxemburg. “We started building a new team a year ago for this Development Cup,” explains Liechtenstein coach Herbi Schadler. “We set several goals for our federation, such as a full-size ice rink in our country, the participation of our country in the IIHF Ice Hockey World Championships while aiming towards the top-50 in the World Ranking. Therefore, it was important to be present at this edition of the Development Cup. Our first goal was to develop the team and to find our identity. We were process-orientated, not result orientated. We planned different steps as this participation was also important for our younger players, getting the experience on the international level.”

Liechtenstein ended in second place. Coach Schadler is satisfied. “We reached all our goals set for this tournament. We ran through our process as we aimed to and the result is very good with only one loss against a strong Colombia, so we are very pleased. We planned well. We want to continue with this young team for the next years to come, building a thorough foundation for the national team program. We set up a good environment for the players and now we want to take it to the next level.”

Liechtenstein has only one very small ice rink in Malbun. The national team practises in neighboring countries Austria and Switzerland. “Our participation in the Development Cup will help us achieve a regular-size ice rink in the country. We had a lot of media coverage playing in Fussen, some national press was even present. So we are very happy about the outcome. This was very helpful. We could show the media and politicians that we work professionally to further develop ice hockey in our country. I think we did a good job. We are a step closer to a new ice rink.”

For first timer Algeria, being present was very important. “The participation in this Development Cup was massive. We really needed this boost,” confirms Karim Kerbouche, from Team Algeria. “Just before we became IIHF member in 2019, we were on a peak with the Algerian government paying attention to us and willing to fund and building our sport in Algeria. It had taken us some years to get this recognition and support. It resulted in government funding for a kids’ program, an ice hockey school on the sole ice rink in Algeria, a rink suited for 3-on-3 games situated in a shopping mall in the city of Setif. Unfortunately, Covid happened some three months later, and everything went in lockdown like in the rest of the world. As a result, our local hockey program went in hibernation for two years. Hence, we needed this Development Cup to get back on track and rekindle the attention of the Algerian government to restart the aid they were providing for us and helping us with the ice hockey school in Setif and for participation in tournaments abroad like this Development Cup.

“I’m very happy with the outcome. I didn’t expect we would win the tournament. We had 10 plus guys born in Algeria. And we bring as many players as possible back to our project for the kids. So, from that side of things, our two victories were amazing. The tournament gave us the opportunity to play against European nations, which was a first for us and win against one, which was big for us. And then of course the historical game against Colombia. An African nation playing ice hockey against a South American, that’s material for the history books of ice hockey. It’s an honour to be part of that history. And it’s definitely interesting, it’s proof ice hockey has become a global sport.”