Cooperation Offer with Japan for Ice Hockey Development in Nepal 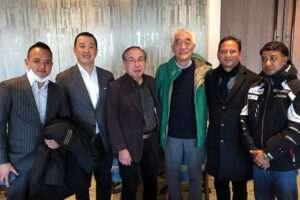 On that occasion the importance of development of ice hockey game and training of Nepali players was given importance. Assistance for the construction of Ice Rink in Nepal and official visit of Nepal and Japan to officials and players of the two countries was discussed, according to Nepal Ice Hockey Association.

Secretary General Rimal is on a trip to Japan.