Costa Rica will play in it’s first international ice hockey tournament.
The venue will be the Castillo Country Club in San Rafael de Heredia, on 18th and 19th of November.
It will consist of 4 teams, three of them from Canada, Los Angeles and the Falkland Islands.

The event will be in the Senior category, ie teams will come with experienced players and in many cases with ex professionals on their rosters, which will give a the event a more professional feel to it, and will be the first ice hockey tournament in Central America.

“We are celebrating 20 years of ice hockey in Costa Rica, I am the founder and one of the coaches of the program. I started the program in 1996 in the Castillo Country Club, we also played in other places with a synthetic ice, but at Castillo Country Club we are already celebrating two decades. In 2014, the ice surface doubled and our program is enjoying steady growth “said Bruce Callow, one of the organizers.

“We have about 40 people in the hockey program, from ages 6 to 40 and 50 years old men and women.
We have many activities every year, exchanges with other programs and from time to time we invite children from rehabilitation centers and orphan hospices to play with us. “
Callow said that the tournament is a symbol of the growth of ice hockey in the country. He also said that countries such as Puerto Rico, Mexico and Argentina have asked if they could participate in this tournament when they realized it they signed up for next year’s edition.

“Hopefully it will continue as an annual event, but we have to concentrate on the this tournament and we have much hope that it will be a success and a historical sporting event in Costa Rica.”
He maintained that thanks to the help of the NHLPA and other organizations and individuals they were able to get donations of equipment to develop the the sport in the country, which is not traditional in Costa Rica, where there is no snow.

“We have appreciated the support of different organizations to help us get protective equipment, in particular the NHLPA’s Goals and Dreams program, which has supported us for 15 years, “said Bruce Callow 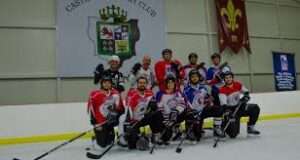