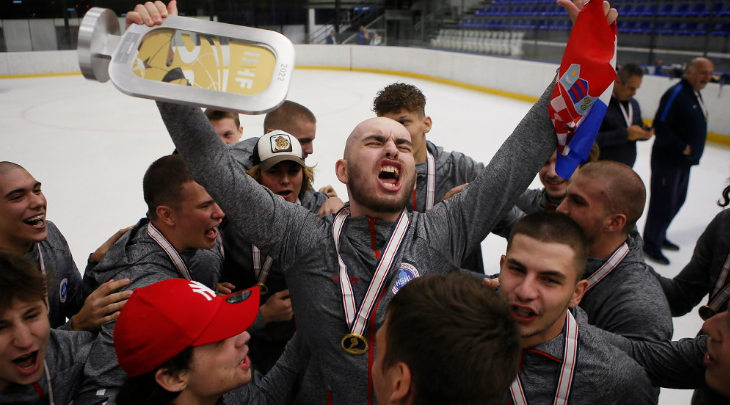 The Croatian players celebrate with the gold medal trophy after winning the 2022 IIHF Ice Hockey U20 World Championship Division II Group B in Serbia.

Croatia sweeps through the 2022 IIHF Ice Hockey U20 World Championship Division II Group B in to win gold. The Netherlands also celebrates after blanking hosts Serbia 4-0 on the final day to claim the second promotion spot.

The tournament in Belgrade was the last of the tournaments played in summertime after being moved from January due to Covid-19.

Advancing in emphatic style, Croatia took maximum points and sealed promotion ahead of Saturday´s concluding 4-2 win versus Belgium. Played in the newly refurbished Pionir Ice Hall in Belgrade, the triumph tasted even sweeter for Croatia, winning it at the home ice of their fierce rivals, Serbia.

Coming from behind to beat Serbia 3-1 in a high-octane opening day encounter set the tone for the Croats. They followed it up by grinding out a 4-2 win against the Netherlands. Against Iceland, they sparked into life scoring four unanswered third-period goals in a 7-3 victory. Four wins out of four in a highly competitive tournament bodes well for Croatia’s promising next generation.

“All of the games were tough, but this is a very good team that works hard. With seven players on this team playing their hockey outside of Croatia the future looks good,” said head coach Marko Sertic as  Croatia’s U20 national team steps up to a level they most recently competed at in 2017.

“We are all very good friends and working very hard as a group. That I think is the key for our win and I think this team will have a good chance of winning a medal at the higher level,” said Croatia’s Alex Dimitrijevic, one of six players on the victorious Croatian U20 roster who also skated for Croatia’s senior team winning bronze at the 2021 IIHF Ice Hockey World Championship Division II Group A.

The key win for Croatia en route to their gold medals came in their tricky opener against arch-rivals and hosts Serbia. The Pionir Ice Hall erupted in a rousing cheer following Matija Dinic´s opener for Serbia at 4:01. But the joy was to be short-lived as Fran Zavrski tied the game for Croatia just 32 seconds later. Working themselves into the game, Serbia´s Minja Ivanovic sat out a two-minute minor when Karlo Marinkovic found the tournament´s top scorer, Vito Idzan, who converted at 6:18 on the power play as Croatia went ahead 2-1.

With emotions running high both on and off ice, the penalty-laden second frame finished goalless. 967 onlookers in the stands were backing Serbia relentlessly in their hunt for goals as the third period wore on. When Croatia’s Bruno Idzan was serving a minor and Serbia charged ahead, his older brother came to the rescue. The tournament’s top scorer Vito Idzan raced clear to cooly slot home the 3-1 shorthanded goal past Akim Padalica with 5:05 left in regulation time.

“We knew that there were going to be a lot of people and Serbia would be favourites playing at home. It was hard, but it was expected. We knew what we were coming for when arriving here,” said Dimitrijevic.

The original six teams skating in Belgrade had been cut down to five following China’s withdrawal due to their current Covid-19 countermeasures and quarantine rules. The suspension from participation at the top of the World Championship pyramid of the Russian and Belarusian U20 national teams until further notice also directly impacted this tournament. With two places for promotion up for grabs and nobody suffering relegation, it gave way to a week full of offensive and adventurous hockey.

Heading into the final game of the tournament, the Netherlands went head to head with Serbia for the second promotion spot. Entering the game with a two-point advantage over their opponents, the Dutch head coach Ron Berteling and his young team were relishing the challenge ahead of them.

“It’s a Saturday night game at eight o’clock against the hosts. When you hit the ice during the warm-up there are already people in the stands. If you are not ready then something is wrong, but these guys will be ready,” he said.

Berteling was not to be disappointed. The Netherlands had gone behind in all of their previous three games, but against Serbia they were switched on right from the start.

Following a goalless first frame, the Dutch broke the deadlock to go ahead on the power play at 8:22 of the middle frame thanks to their top scorer Jay Huisman. He then turned provider three minutes later as Mike Collard doubled the Dutchmen’s lead.

Despite Serbia winning the shots 28-20 in the game, the crowd of 826 was silenced at 2:11 of the third when Rolan Loos stretched the Dutch lead even further. Desperate four goals, Serbia head coach Spiros Anastasiadis went for bust pulling Padalica from the net with 6:47 left of the third frame. 53 seconds later Pim van der Meulen hit the final nail in the coffin with his empty netter.

“We dreamed of winning the gold medal, but our goal was promotion and to go up to a higher group,” said Berteling as the Netherlands sealed a return to a level, they last competed at in 2018.

A dejected Serbian team had to settle for bronze. A slight consolation is that Serbia’s Padalica was voted best goalkeeper of the tournament. Wesley de Bruijn of the Netherlands won the best defender award and Croatia’s Vito Idzan was selected as the top forward.

The tournament also marked the end of the 2021/22 season in the IIHF Ice Hockey World Championship program with the final remaining tournament being concluded after being pushed ahead from its original date due to Covid-19.

The 2023 IIHF Ice Hockey U20 World Championship Division II Group A will be played in Kaunas, Lithuania between 11 and 17 December 2022 with players born 2003 and later eligible to play and return. Croatia and the Netherlands will then play against Great Britain, Spain, Lithuania and Romania.