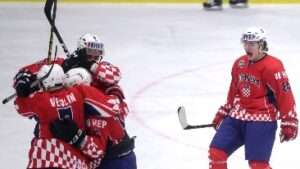 The Croatian players celebrate the game-winning goal against Serbia with 2:25 left in the game

Croatia beat Serbia 2-1 on home ice in Sisak thanks to a late goal from Luka Mikulic. With the victory the Croats won the 2019 Olympic Qualification Preliminary Round 2 Group M and advance to the third round.

“The goal was but a moment in the game. It’s a nice feeling. It was a tough game but we were better,” said Mikulic, who scored three goals in the tournament.

It was a game full of scoring chances and power plays in which Croatia outshot the Serbs 31-29. Vilim Rosandic was another key player for Croatia with 28 saves and a tournament-leading 95.35% save percentage.

Tournament win, neighbours, mixed history, and a lot of known faces since the best Croatian and Serbian clubs play in the same league. There was certainly no extra motivation needed for the players. Croatia historically had the upper hand in these clashes and is ranked one place better in the IIHF Men’s World Ranking, however, Serbia won its only official men’s national team game against Croatia just last April when it hosted the 2019 IIHF Ice Hockey World Championship Division II Group A on home ice in Belgrade.

The Serbs earned the tournament win and promotion back then. The Croats perfectly avenged that loss by winning on home ice and advancing in the Olympic Qualification campaign.

Serbian repeat or Croatian revenge – both teams were looking to deliver the answer early on and had their scoring chances. It was the Croats who delivered first and last.

Tadija Miric brought the puck into the Serbian zone, dropped it to Ivo Kaleb who sent it towards the net from a sharp angle. There Miric was on the spot to open the scoring at 6:09 of the opening frame.

The Serbs were not without scoring opportunities either and opportunities knocked in the 10th minute when both Miric and Fran Srketic were in the penalty box. However, the Croats were well organized and killed that penalty without dangerous moments.

Otherwise the Croatian hosts were mostly in charge of the first period and gave Serbian goalie Arsenije Rankovic hard work.

The Serbs increased their forechecking in the second period and had two power plays but the Croats continued to defend well. Eventually their work and patience paid off with 48 seconds left in the period. In a face-off at lightning speed by Serbia’s first line, Srdijan Subotic won the puck battle in the neutral zone, passed to his right winger Mirko Dumic at the blue line who fed a breaking away Nemanja Vucurevic, who tied the game at one to the joy of the small contingent of Serbian supporters among the 989 fans at the arena in Sisak.

Serbia started with an advantage in the third frame. After Stjepan Cizmadija was sent to the sin bin for a late hit, he was soon joined by a teammate due to a penalty for too many players on the ice. The Serbs took their time-out for the 56 seconds of 5-on-3, however, the Croats also killed that penalty. After a tripping call against Mikulic, Mirko Dumic had the next opportunity for Serbia with a penalty shot but his attempt went wide.

The Croats were the next to have a two-man advantage in the eighth minute but also the Serbs did a good job killing penalties. With five minutes left in regulation time the Croats again had the chance to play more than one-and-a-half minute 5-on-3 but also these penalties remain unused.

The teams defended their nets heroicly when they were a man short, it was the more simple situations with open space that created goals. With 2:25 left Croatia’s Mikulic and Dominic Rene Canic attacked along the right board. Mikulic passed Canic, got the puck back close to the crease and slid the puck past Rankovic.

Like the four previous times, Croatia will play in the second-last round of the Olympic Qualification also for Beijing 2022.

Their venue will be known once the other groups are over and will depend on the three qualifiers for the next round and the position in the 2019 IIHF Men’s World Ranking. Possible options are traveling next door to Jesenice, Slovenia, in February or the group in Nur-Sultan, Kazakhstan. More will be announced later on IIHF.com