Czech women off to Beijing 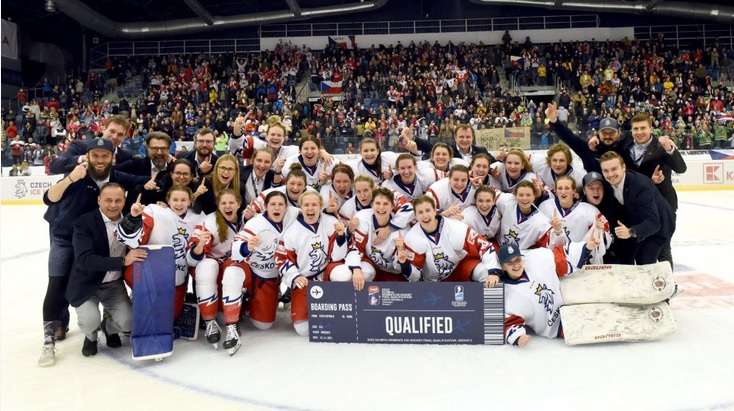 There was a big-game feeling in the air in Chomutov on the final day of qualifying for the women’s ice hockey tournament at the 2022 Winter Olympics, prior to the start of the all-important clash between the Czech Republic and Hungary. Two 2-0 teams that had come close before but had never reached the Olympics, but only one would make history while the other would have to wait another cycle.

But on this day, the Czechs weren’t in the mood for drama and made it clear right from the get-go that this spot was not up for dispute. They scored three times in the first period before cruising to a 5-1 victory, and punched their tickets to Beijing.

“We played extremely smart, extremely composed, we waited for our scoring chances,” said Czech head coach Tomas Pacina. “We played well offensively and scored on our chances, but also extremely well defensively. I’m very proud of the girls, very happy for Czech women and for women in general. Finally, Czech women’s hockey will be represented where it belongs, and that’s at the Olympic games.”

Just 1:24 into the game, Aneta Tejralova, fresh off a five-assist performance against Poland, added another helper to her total when she came out of the corner and found Klara Hymlarova at the far post for the tap-in, sending the already excited Czech crowd into a frenzy.

“I think the first goal really set the tone for the game in our favour,” said defender Sara Cajanova. “We increased our self-confidence, played our system to the fullest and made virtually no mistakes that could cost us the Olympics.”

Talking about the source of the team’s energetic start, captain Alena Mills said: “It comes from the group of girls we have and the coaching staff. We all work for each other, we all get along on the ice and on. We’re always singing, which makes for a fun game and you see the result. We’re a team and we can build on the little things, support each other and give each other energy.”

A Hungarian power play stemmed some of that early momentum but the Czechs soon went back to the attack again, and in the midst of a goalmouth scramble at 12:15, Lenka Serdar got her stick on the puck and whacked it inside the post to make it 2-0.

Hungary needed to stem the tide and had a chance to do something on the power play when Daniela Pejsova was sent off for interference at 13:45. But after Alexandra Huszak won the attacking-zone faceoff, Vendula Pribylova beat everyone to the puck at the point and was off to the races, beating Nemeth with a forehand deke.

“Obviously, we were the underdogs and it was a quick turnaround after playing late last night, so maybe our gas tank wasn’t quite full,” said Hungarian head coach Lisa Haley. “Playing against a team that has as much speed as the Czechs do, it was a mountain we couldn’t quite get to the top of. We couldn’t afford to fall behind like that. We needed to keep the game close into the third period, but that’s probably the best I’ve ever seen the Czechs play and they’re deserving of this.”

Hungary’s best chance of the opening period went to Reka Debasi, who was robbed by the glove of Klara Peslarova from point-blank range with just over five minutes to go.

After holding a 12-7 advantage in shots over the opening 20 minutes, the Czechs were even more dominant in the second with a 14-3 edge. By this time, they didn’t seem as concerned with adding to their lead as they were managing the puck, and didn’t generate a lot of great scoring chances.

They did score one goal in the 28th minute, with defender Samantha Kolowratova joining the rush to make it a 3-on-2, and converting the backhand pass from Noemi Neubauerova.

“We had our ups and downs,” said Hungarian defender Lotti Odnoga. “I think we could have attacked the net more and closed the gaps and stayed closer with them, but it doesn’t do much good to think now about what we could have done better. I think the Czechs just played better than us and it shows in the result.”

Hungary showed some life on a third-period power play but it came to an end when Hayley Williams was called for slashing while digging at a puck under Peslarova’s glove. On the ensuing Czech power play, Denisa Krizova put in a rebound with 4:30 to play.

The only question remaining was whether Peslarova’s shutout would remain, and with 2:01 to play, spoiled it, Huszak forced a puck over the goal line that the Czech goalie quickly pulled out, but video replay confirmed that it did indeed cross the line.

But that did little to dampen the spirits of the 1853 in attendance, as the tense pre-game air was replaced by one of anticipation. They stood for the final minute and as the seconds ran off, the celebration was on throughout the arena.

After the on-ice celebrations were done, the scene shifted to the Czech dressing room, which according to defender Pavlina Horalkova, included: “Singing, dancing, beer, champagne … I hope it never ends. Let’s keep it going! ”

Turning his attention to the Olympics, Pacina said: “We have a little bit of breathing room now as a coaching staff and we have a tough job to do picking the team. Two of our best players aren’t here. We’ll get together in December and we’ll centralize on January 5th, two weeks before we fly to the Olympics.”