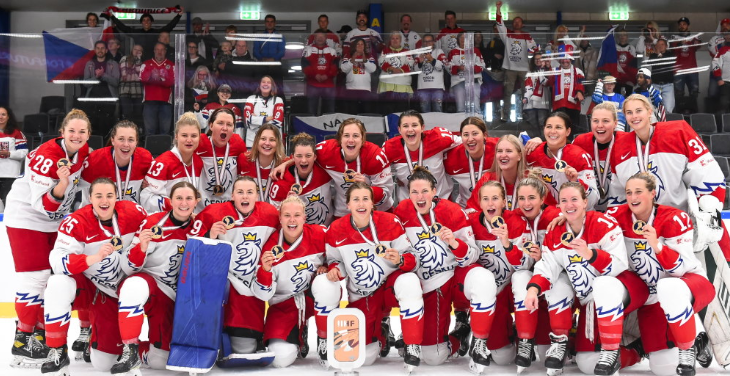 Czechia was the more determined team, the more energetic, more emotional, and on this day more skilled team, defeating Switzerland 4-2 to win their first ever medal in Women’s World Championship play. Indeed, the Czechs have played in only six of 21 WW tournaments, never finishing higher than sixth.

They beat a Swiss team that has been plagued by injuries and absences, and today again coach Colin Muller was able to dress only 17 healthy players. The team simply couldn’t muster the offence, and while Czechia won the game because the scoreboard showed they had more goals, they really won with a masterful defensive performance, allowing the Swiss nearly nothing in front of goalie Klara Peslarova.

“In the third they, pushed us, and they should,” winning coach Carla MacLeod said of the Swiss. “They’re a great team and worked hard to even it up. But we’ve got great goaltending in our program, and that’s the foundation of building out. And our group didn’t waver. We understand who we are, what our game style is. I’m really proud of this group for staying the course throughout the tournament.”

Natalie Mlynkova had two goals for the victors and goalie Klara Peslarova stopped 18 of 20 shots for the win.

“They started the game better, and we only played 30 minutes,” offered losing captain Lara Stalder. “I thought the last 30 we finally woke up and played with the puck. Before, it was a big mess. It’s disappointment right now. I’m so proud of how the team battled when I was out, playing with basically three lines. With a full lineup, who knows, but there are a lot of what ifs.”

“I was just telling the girls we were at the first U18 championship in Calgary, and we got bronze and on the plane coming home we were saying it will probably never happen on the senior team. And now, 14 years later, it’s amazing. We’ve put in so much work, and this is the result. It’s finally paid off. It’s well deserved.”

The Czechs came out and proved the superior team, showing creativity in the offensive end and hemming the Swiss in on many occasions. They created turnovers and were had on the puck carrier, sending shots on net at every opportunity. The Swiss did a good job of blocking some of those, but Andrea Braendli was also forced to make several good saves along the way.

Czechia opened the scoring at 7:03 on the power play. Katerina Mrazova teed the puck up nicely at the point for Mlynkova, who let go a low, hard shot that found the back of the net.

The Swiss replied in kind four minutes later, however. Alina Marti let go a one-timer set up by Lara Christen, who was back in the lineup after leaving the semi-finals against Canada midway through with an injury and played a team high 26:33 today. Marti’s goal was the team’s first shot of the period, and it came at 11:19.

Czechia found itself short-handed later in the period but did a good job of killing that off and generating a goal off that PK. Daniela Pejsova was serving the penalty, which expired just as her teammates gained possession deep in their end. Dominka Laskova fired a long pass to Pejsova as she came out of the penalty box, and she waltzed in on goal and scored on a nice deke.

The Czechs put on a dominating performance in the middle period, scoring the only two goals and allowing a mere four, mostly peripheral shots. They made it 3-1 at 2:06 when a point shot hit a cluster of bodies in front and Vendula Pribylova was there to smack in the rebound.

Eight minutes later they added to their tally on a patient play from Mlynkova, who circled with the puck in the high slot before firing a shot through a screen that beat Branedli to the stick side.

The Swiss had a couple of early power plays in the third and capitalized on the second. Nicole Vallario snapped a shot through traffic at 9:11 to make it a 4-2 game, but just before she scored Braendli made a sensational toe save off Mlynkova, who had a short-handed breakaway.

The Swiss got stronger in the third, but Czechia hung on, playing solid defence, getting in the way of shots and passes, and using their emotion to keep their tempo. Muller pulled Braendli with two and a half minutes left, but nothing came of the extra skater. Switzerland goes home battered and bruised, and fourth, while Czechia celebrates an historic medal in their hockey program.