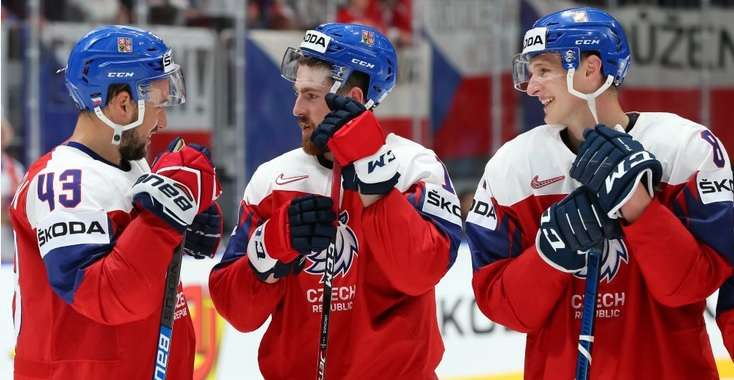 Czech stars Jan Kovar, Filip Hronek and Dominik Kubalik are among the returning players from the World Championship squad two years ago

Like most of the world’s elite hockey nations, the Czechs are heavily impacted by a lack of NHLers. Even in years where they don’t have a lot of depth, they’re usually able to rely on stars such as Jakub Voracek, David Krejci or David Pastrnak. This year there are six NHLers but they’re all 25 or younger and don’t have a lot of top-level international experience, so it will be time for some new blood to fill the leadership and top offensive roles.

The starter should be Simon Hrubec, who played two games in 2019 as a backup to Patrik Bartosak and is the only goalie on the roster with any World Championship experience. Hrubec, 29, was a long-time netminder for Ocelari Trinec but went to the KHL this past season, where he backstopped Avangard Omsk to the Gagarin Cup after being acquired mid-season from Kunlun Red Star. In 2017/18, Hrubec was the MVP of the Champions Hockey League.

Roman Will, 28, who played one game for the Colorado Avalanche back in 2015/16 but now plays in the KHL for Traktor Chelyabinsk, will challenge Hrubec for minutes between the pipes. Petr Kvaca, just 23, played his way onto this team based on a stellar season with Bili Tygri Liberec, which he backstopped to the Extraliga finals.

This Czech team’s defence is big and young. The two oldest in the group are Andrej Sustr and Ondrej Vitasek, who are both 30, and they are among four d-men who are at least 193 cm – Michal Moravcik and David Musil are the others. Sustr is an interesting story in that, despite his experience in the NHL, KHL and 2016 World Cup of Hockey, this will be his first World Championship. At 201 cm and 98 kg, he is also the team’s biggest player.

Among the nine defencemen on the roster, three are from the Finnish Liiga and two each are from the NHL and KHL and domestic Extraliga. The two NHLers – Libor Hajek of the New York Rangers and Filip Hronek of the Detroit Red Wings – are also the youngest of the group at 23 years of age. Despite that, Hronek is playing in his third World Championship and has been named one of the team’s alternate captains. Hajek impressed at the 2018 World Juniors in Buffalo under coach Pesan, where he helped the Czechs to a fourth-place finish with eight points in seven games.

The group of Czech forwards has a bit wider variation in age, ranging from three players under 22 to 33-year-old Tomas Zohorna, the oldest player on the team. The second-oldest and by far the most internationally experienced player on the team is 31-year-old captain Jan Kovar. With 29 points in 52 career World Championship games over six previous events, plus five points in six games at the 2018 Winter Olympics, the Czechs will lean on the playmaking centre for both offence and leadership. This past season, Kovar won the scoring titles for both the Swiss National League’s regular season and playoffs, won the title with EV Zug and received the playoff MVP award.

Eight of the 16 forwards on the roster are 25 or younger, including all four NHLers – Dominik Kubalik, Jakub Vrana, Filip Zadina, and Filip Chytil. With 38 and 36 points this season, respectively, wingers Kubalik and Vrana will be expected to lead offensively. The youngest player on the team is 20-year-old Matej Blumel, who is coming off a breakout season with Dynamo Pardubice.

Dmitrij Jaskin, who recorded 137 points in 133 regular-season and playoff games combined for Dynamo Moscow over the past two seasons and has performed well for the Czech national team in the past, will miss this tournament with an injury.

Although only 43 years of age, Filip Pesan has established himself as a respected coach in the Czech Republic. He led Liberec to a national title in 2016 and guided the Czech U20 team to a semi-final berth at the 2018 World Juniors – the only time in the last 16 years that’s happened. Over the past several years he’s also played a key role in coaching and player development in the Czech Ice Hockey Association. As already mentioned, this is a young team and several of the players have played for Pesan before, so he should have no trouble getting everybody on the same page.

If Pesan lacks experience at hockey’s elite levels, his assistants more than make up for that. Between Jaroslav Spacek and Martin Straka, the Czechs have four World Championship gold medals, two Olympic golds (both members of the 1998 team) and nearly 2000 NHL games behind the bench.

The Czechs, and the Czechoslovaks before them, have never finished worse than seventh place at the World Championships, meaning they’ve never failed to make the quarter-finals since the current playoff format was adopted. Having said that, it’s probable that the Czechs will finish in the top four of Group A but not guaranteed in a group that also includes Russia, Sweden, Switzerland, Slovakia, Denmark, Belarus and Great Britain. While Czech fans will look forward to those games against Russia and Sweden, which are both winnable, the games against the Swiss and Slovaks could be crucial for positioning, and the Czechs will have to be wary of losing points to Denmark and Belarus. With a lot of the top teams missing NHL players, a lot of mid-level squads could see this as their chance to make a move. As usual, once the knockout stage of the tournament begins, most teams remaining have a realistic chance.