Czechs on to quarters 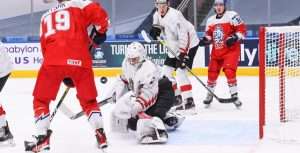 The Czech Republic overcame a nervous start to score four goals in the second period en route to an easy 7-0 win over Austria.

The win solidifies the Czechs’ fourth-place finish in the Group B standings, and the team will now play the winner of today’s Canada-Finland game in the quarter-finals on Saturday. The Austrians go home but will return next year a little bit older and wiser.

“We need to play the same way we played today,” Czech goalie Nick Malik said of his team’s chances in the playoffs. “We need to follow the coach’s game plan and play good hockey. We can’t be nervous and have to believe we can play with anyone.”

“We’re still in the tournament, which is great for us,” said coach Karel Mlejnek, “and now we have to prepare for the quarter-finals and plan for our opponents. That’s the key, to analyze our opponents and figure our what we need to do to be better.”

The loss means Austria has yet to win a top-level U20 game after 21 tries, the longest such streak in U20 history. And, they scored just once in four games, which just is not good enough.

“It was really tough for us because we have no experience at this level,” said capain Marco Rossi. “Everything was new for us, but it will be better next year. We had a really young group here, but we’ll know what to expect next year and we’ll have a better chance. I’m still proud of how we played.”

“We have to get stronger physically, and the players have to play in leagues and play against these types of opponents,” offered coach Roger Bader. “They are not used to it. And here we had a bit of bad luck in our group, where four of the teams are in the top six of the World Ranking. I don’t think we are far behind Switzerland, Germany, and Slovakia.”

The game also featured only one minor penalty, tying the record for fewest penalty minutes by one team in a U20 game (0, Czech Republic) and for both teams (2).

Martin Lang led the way with two goals and an assist while Pavel Novak had a goal and two helpers.

Coming into the game the implications of the game were very clear. If Austria won in regulation, it would qualify for the quarter-finals. If the Czechs lost after regulation, or won any which way, they would advance.

And the way the first period went, Austria showed just enough life to suggest they had the wherewithal to pull off a giant upset. Although the Czechs had the better of play, shots favoured the Czechs 15-6, the second lowest period margin for the Austrians this tournament.

As well, goalie Sebastian Wraneschitz continued his fine play, blocking everything that came his way and giving his team a fighting chance, even though it had scored just one goal in ten periods of hockey.

“We needed to get better in the offensive zone, so we just wanted to keep going and wanted to score the first goal,” Simon Kubicek noted. “We did that in the second period and then we played better and better.”

“The game wasn’t easy for us mentally. After the first period we tried to tell our players to stay aggressive and keep going to the net,” Mlejnek added. “That’s where the scoring chances are.”

And the first good chance of the second went to Austria. Lucas Thaler cut in on goal off the right wing, but after a nice move he fumbled the puck and couldn’t get a shot off. The rest of the period was all Czechs.

They opened the scoring at 6:27 when Simon Kubicek took a bouncy shot from the point that hopped unluckily over Wraneschitz’s glove and in. Six minutes later, the Czechs made it 2-0 off a wild scramble that saw the puck come to Martin Lang. He had an open net and didn’t miss.

The Czechs got two late goals which were, in essence, insurance markers. Lang got another off a long shot that beat Wraneschitz cleanly, and then, with only 32.3 seconds remaining, Filip Prykril redirected a pass from Radek Muzik in close.

In all, shots were 23-2 in the middle period, a clear indicator of the Czechs’ domination.

Pavel Novak added to the total just 1:39 into the third when his sharp-angle shot found its way behind Wraneschitz through a screen which gave the goalie no chance.

David Jiricek made it 6-0 at 16:45 of the third on a similar goal to the first, his drifting shot from the middle of the point going all the way. Jan Mysak closed out the scoring with 25.6 seconds remaining.