Czechs Perfect in Shootouts After Win Against USA 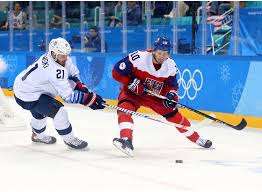 The first quarter-final game of the men’s Olympic hockey tournament in PyeongChang, South Korea required extra time to declare a victor, with Petr Koukal scoring the game-winning goal to give the Czech Republic the win and a spot in the semi-finals on Friday.

Perhaps the most dangerous duo at the 2018 Olympics included Ryan Donato and Troy Terry, who have managed to find each other in most American scoring chances. At 6:20, Terry waited out a defensive effort by the Czechs before finding Ryan Donato in front of the net. Donato would re-direct the puck past Pavel Francouz just in front of the net, giving USA the 1-0 lead early in the game.

But nine minutes later, the Czechs answered back. Two players with similar names, Jan Kovar and Jan Kolar, connected after Kovar won the puck in a faceoff back to the point. Kolar would crush a hard shot past Ryan Zapolski with a bomb blast from the point, tying the game up at one apiece.

The second period would see the teams trade goals again to make it 2-2. At 8:14, Thomas Kundratek picked up the puck at the blueline after a bit of a scramble in front with Martin Ruzicka giving it to his defenceman with a good shot. Kundratek took advantage of Zapolski not fully being in the right position in his crease, giving the Czechs their first lead.

But at 10:23, the Americans scored to knot the contest back up, this time thanks to a fourth-line forward. Former Atlanta Thrashers centreman Jim Slater would get one shorthanded after sending a nice shot past Francouz, scoring his first Olympic goal just months after considering retiring from the game for good.

For the first time in the playoff round, a shootout was required to see which team would advance and which team would go home early. Petr Koukal scored the lone goal in the shootout, winning the game and ending the tournament for the United States.

With the win, the Czech Republic will meet up with the winner of the 16:40 local time match between Russia and Norway in the semi-finals on Friday, also at 16:40. This is the first time the United States will not make the final four since 2006, while the Czechs are looking for their third Olympic medal after a gold medal in 1998 and a bronze in 2006.