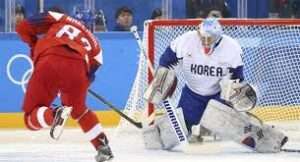 In any case, the Korean men’s national team should be proud of its Olympic debut at the packed Gangneung Hockey Centre against a formidable foe.

“Obviously they have fans behind their back,” said Repik. “They were very excited to play the Olympics at home, and they left everything on the ice, so it was a hard game for us.”

This was Korea’s first official top-level IIHF game ever, and head coach Jim Paek got great mileage out of both his domestic talent and North American imports. A 2-1 loss is very respectable for Korea, which sits 22nd in the IIHF World Ranking, while the Czechs are sixth.

It was an intriguing goalie duel. Pavel Francouz, a four-time IIHF World Championship participant and a KHL all-star, got his first Olympic start between the pipes for the Czechs. Korean starter Matt Dalton, 31, is a native of Clinton, Ontario, and saw action in the NCAA, ECHL, and KHL before starring for Anyang Halla over the last four seasons.

The Czechs, seeking their first gold medal since 1998 and first medal since 2006’s bronze, outshot Korea 40-18. Dalton was superb to keep it close.

“That’s why he’s there,” said Korea’s Brock Radunske. “He’s played well ever since he came to Korea and gives the guys confidence that he’s going to be there if somebody does make a mistake.”

The Koreans played with pride, grit, and structure, determined not to make it a cakewalk for their opponents. Neither team seemed distracted by the hypnotic spectacle of a whole section of synchronized North Korean cheerleaders directly behind the Czech net in the first and third periods.

The red-, blue-, and white-clad cheerleaders have also supported the unified Korean women’s team at all of its games. Their presence here was noteworthy since the men’s team has no North Koreans.

The atmosphere was electric. There were gasps and cheers from the 6,025 in attendance when Dalton foiled Czech captain Martin Erat’s opening shot on goal, and they only got louder when Kisung Kim set up Sangwook Kim – the team’s two biggest Korean-born threats – in front for an even better chance.

At 7:34, Korea opened the scoring on a glorious rush. The towering Radunske, nicknamed “Canadian Big Beauty,” dished a pass to Minho Cho, who used Czech defenceman Jan Kolar as a screen to fool Francouz with a low release from the high slot.

Cho wears #87, and this was a goal Sidney Crosby wouldn’t have sneezed at. The 1987-born Anyang Halla forward has played hockey since he was 10 years old, and was named the Asia League’s 2010 rookie of the year.

Midway through the first period, Dalton made a mind-blowing save on Roman Cervenka, who grabbed the rebound from defenceman Adam Polasek’s shot and cut cross-crease, only to be denied by the goalie’s blocker as he dropped his stick.

At 11:59, the Czechs made it 1-1 on their first power play. Repik zipped a pass to the crease, where Jan Kovar coolly tipped it past Dalton.

Opportunistic hockey is Czech hockey. Repik got a shorthanded break with Lukas Radil off for goalie interference. The former Florida Panther burst down left wing to squeeze a high shot through Dalton and then ducked behind him, banging in the loose puck for a 2-1 lead at 16:18.

“I’d like to have that second one back, but I felt better as the game went on,” Dalton said.

Even though the Koreans trailed by one through 20 minutes, they had to be happy with their position after being outshot 15-6.

In the scoreless second period, the physical intensity ramped up, and the crowd roared with disapproval when Kovar dumped Mike Testwuide into the boards. And the Koreans kept coming in the third, crashing Francouz’s crease for rebounds during an early power play with Ondrej Nemec off for hooking.

The Czechs pressed for that third goal during back-to-back Korean minors, but couldn’t find the twine, although Cervenka came close, hitting the cross bar from in tight.

“It was a tight game, but we had some chances we didn’t score on,” said Repik.

With just over seven minutes left, Dalton stoned Tomas Mertl from the slot with his quick mitt and left the Czech forward shaking his head. Two minutes later, Cervenka got two cracks at it on a solo jaunt, but couldn’t solve the goalie. There was still hope for the hosts.

Paek pulled Dalton for the extra attacker with 1:03, and the Koreans laid it all out there. Francouz made a fine pad save on Radunske’s last-second centre point blast to preserve the 2-1 win.

On Saturday, the Czechs will face Canada, while Korea battles Switzerland.

This is just the start of Korea’s international odyssey in 2018. It will also make its IIHF World Championship debut in Denmark in May.