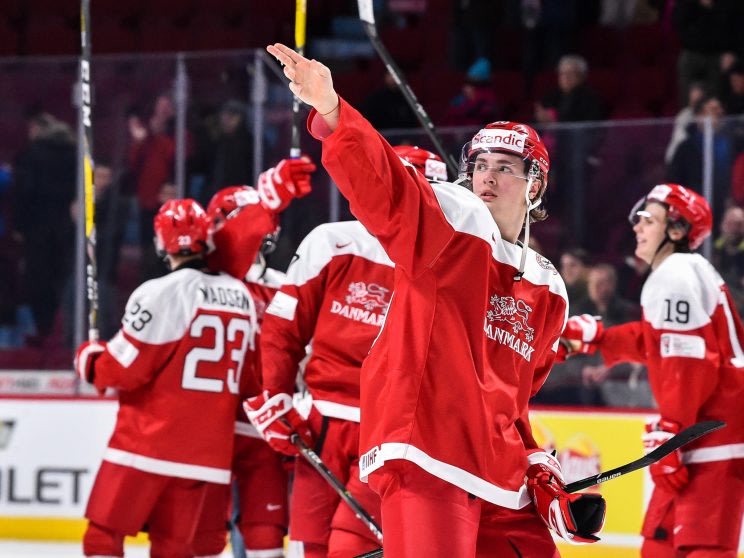 Mathias From scored the 3-2 overtime winner at 0:47 as Denmark beat the Czechs for the first time in World Junior history at the Bell Centre on Thursday.

From, who plays for Sweden’s Rogle Angelholm, beat Czech goalie Daniel Vladar with a high backhander on a solo rush. The 19-year-old forward made a memorable 2017 World Junior debut after being sidelined with an injury since mid-December.

“I knew yesterday that I was going to play,” said From. “It was hard to come into the game at first because I didn’t play for some time. [My injury] happened on the first day of training camp.”

“He brings a ton of speed and a lot of skill as well,” said Danish captain Alexander True. “He’s dangerous, as you could see when he scored that OT winner. It’s really nice to have him back.

Joachim Blichfeld and Nikolaj Krag added a goal and an assist apiece for Denmark. Martin Necas and Filip Hronek scored for the Czechs.

The Danes are on a roll. They got bombed 6-1 in their opener versus Sweden, but then shocked Finland 3-2. They were outshot in that game, and again versus the Czechs, 34-22. Yet they’re winning anyway.

Czech coach Jakub Petr’s group has points in three straight games, but is still struggling with consistency. They opened with a 2-1 win over defending champion Finland but then lost 4-3 in overtime to Switzerland.

“I think the first period was really good for us, but after that, we just stopped playing,” said Czech forward Filip Chlapik. “We were scared. In the third period, we were scared to do something. There is nothing much to say. It wasn’t a good game for us.”

“We know that we are a strong skating team,” said Blichfeld. “When we meet big opponents like the Czech Republic and Finland, we know we just need to go out there and skate as hard as we can. That paid off.”

Denmark wraps up its round-robin slate on Friday against Switzerland. The Czechs will face Sweden on New Year’s Eve.

“We gotta keep our feet on the ground,” said True of facing the Swiss. “We know they’re a really good team, so it’ll be a tough game to play.”

In this game, two odd plays required video reviews in the first period.

The Czechs dominated play early on, keeping Danish goalie Lasse Petersen busy. Adam Musil went hard to the net, sliding a backhand and bumping Petersen’s pad. Necas nudged the puck over the line at 7:56, and the officials did not spot it until play stopped a minute and a half later. Video review confirmed it was good, and the 17-year-old HC Kometa Brno centre had his first World Junior goal.

Denmark then had a great chance on a breakaway, but Vladar foiled Blichfeld’s backhand deke. On the backcheck, Czech defenceman Daniel Krenzelok, took the net off its moorings and was assessed a delay of game penalty at 12:40, as his actions denied Jonas Rondbjerg a great scoring chance.

The Czechs thought they’d taken a two-goal lead shorthanded after the puck crazily bounced off the back boards for Lukas Jasek to put in at 14:26. But video review came to the rescue again. It showed that Jasek, standing in the crease, kicked the puck in, and it was waved off.

In the middle frame, the Danes picked up their pace. The Danish power play clicked on its fourth opportunity of the afternoon to make it 1-1. Blichfeld faked a slap shot before stepping into the left faceoff circle and beating Vladar high to the glove side through traffic for his second goal of the tournament at 8:41.

“In the last two periods, we didn’t play the same hockey as we did in the first,” said Hronek, the Czech captain. “We made a couple of bad plays in our D zone.”

At 10:29 of the second, the Czechs had an answer. After the Danes failed to clear the puck out of their zone, Hronek stickhandled into the middle and then flung a high shot past Petersen at 10:29.

In the third period, the Danes came on despite being outshot 12-6. Krag tied it up on an in-tight one-timer beautifully set up by Blichfeld at 13:36. With under four minutes left, Vladar denied Jonas Rondbjerg, fishing for a rebound on the doorstep.

Vladar, who backstopped the Czechs to their surprising 2014 World U18 silver medal, finally made his World Junior debut. The 19-year-old member of the AHL’s Providence Bruins was a spare goalie at the last two World Juniors, and Jakub Skarek got the start in the Czech Republic’s first two games in Montreal.

“Vladar played very well,” said Hronek. “We must block shots for him. On their second goal, there was bad communication in our D zone.”

Looking for the go-ahead goal in regulation, the Czechs called their time-out with 26 seconds left and a faceoff in the Danish end, but it didn’t pay off.

Blichfeld was in a chipper mood post-game: “We have played two good games now. So we’re probably going to win the next one too!”