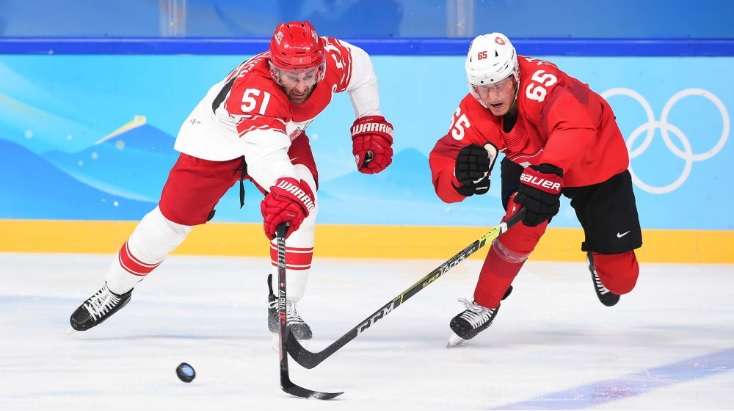 Just a few hours after Alina Muller launched the Swiss women’s team into the semi-finals at Wukesong Sports Centre her brother Mirco and his teammates skated out onto the same sheet of ice in the hopes of duplicating the women’s efforts. Alas, they squandered a 1-0 lead and fell, 5-3.

The Danes finish the preliminary round robin with a 2-1 record while the Swiss fall to 0-3. The Swiss have now lost their last five games at the Olympics going back to 2018.

The teams have played six times in the World Championship since 2003, when the Danes returned to the top pool, and Switzerland had won every meeting. This was their first ever matchup at the Olympics.

The Danes were the first team to put the puck in the net in this one, but it was clear that Mikkel Aagaard tipped a point shot in with a very high stick. The game settled into a low-risk, low chance affair, neither team wanting to make that costly mistake which, between low-scoring teams, could be the difference.

Late in the period, though, that’s just what happened. Yannick Weber exploited a lapse in the Danish defence when he carried the puck around the net, and he saw Enzo Corvi alone in front. Corvi had time to take the pass, cradle the puck, and roof it over the glove of Sebastian Dahm without being touched.

Soon after, the Danes had a great chance but couldn’t convert. This time it was Patrick Russell who spotted captain Peter Regin alone in front, but Regin couldn’t control the puck for a dangerous chance.

It was a different Danish team that came out to start the second. They got a power play only 39 seconds in, and seven seconds later converted. It all started with a faceoff win in the Swiss end, and then Frederik Storm made a nice pass in front to Regin who beat Reto Berra with a quick shot.

Just 21 seconds later, the Danes took the lead on a harmless play. Nicholas B. Jensen took a quick shot from the point that was tipped in front by Storm. The puck was going well wide, but it then hit the skate of defender Lukas Frick in front and in. The Danes had a glorious chance to score again midway through the period during a Danish power play. Bodker and Frans Nielsen found themselves on an unlikely two-on-the-goalie, but Bodker waited too late to make the pass and Nielsen didn’t get a good shot away.

Nevertheless, Denmark went up 3-1 at 13:13 courtesy of Bodker. He came out from the corner unmarked, and his low shot through traffic beat Dahm between the pads. Yannick Weber hit the post late in the period off a great feed form Joel Vermin, but the puck stayed out.

Denmark added to its lead early in the third. Jensen tried to jam the puck in, but although Damn made the save he was down and out. Nikolai Meyer came in and picked up the garbage, banging it into the open net at 1:55 for a 4-1 lead.

Three minutes later, however, the Swiss got one back on the power play. Romain Loeffel fired a one-timer over Dahm’s shoulder off a nice set-up from Ramon Untersander. They dominated much of the period but had their momentum stopped after taking two quick penalties. The Danes had a five-on-three for 1:53 but coudn’t up their lead.

Coach Patrick Fischer gambled and pulled Berra with 3:45 to go, and the move paid off.Fabrice Herzog buried a one-timer at 17:28 to cut the lead to one, producing a wild finish. Storm got an empty netter with 58.4 seconds left.