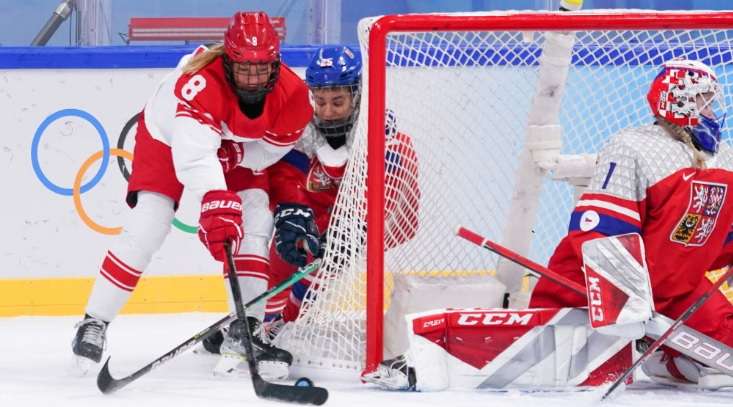 Denmark’s chances of advancing to the quarter-finals in the country’s first-ever Olympic ice hockey tournament remain alive after a 3-2 come-from-behind victory over Czechia. The Czechs could have secured their place in the elite eight with a win, but will instead need a result in their last game against Japan or get some help.

The Czechs held the early edge in play but it was Denmark with the first good scoring chance, with Michelle Weis just firing wide from point-blank.

The Czechs opened the scoring just shy of the six-minute mark when Aneta Tejralova moved in from the point and converted a pass from Denisa Krizova, beating Cassandra Repstock-Romme over the right pad.

A couple of minutes later, Natale Mlynkova very nearly made it 2-0 when she made a move to her backhand to beat the Danish goalie but had her pocket picked before she could slide the puck into the open net. At the other end, Michaela Pejzlova was upended at her own blueline, creating a 2-on-nothing break for Denmark. Captain Josefine Jakobsen had the option of a drop pass but chose to hold and beat Viktorie Svejdova with a nifty backhand deke to tie the score.

The Czechs again got off to a fast start in the second period and regained the lead three minutes in when Tereza Radova found Katerina Mrazova with a backdoor pass. After misfiring on the one-time attempt, Mrazova took another whack at the puck and put it in.

However, the Danes answered answered again and, again, it was an unassisted goal resulting from a turnover. Just 1:27 later, Tereza Vanisova lost the puck in her own zone and Weis picked it up right in front of Svejdova, beating the Czech goalie again on the backhand.

Turnovers continued to plague the Czechs in the second period. Just shy of the game’s midpoint, Daniela Pejsova coughed up the puck to Josefine Persson. Skating in alone on the Czech net, she was denied by the pad of Svejdova. A few minutes later, the Czechs were pressing on the power play and Tejralova just failed to convert her second of the game when she couldn’t lift the backhander over Repstock-Romme’s outstretched pad.

Starting the third period on the power play, the Danes took their first lead of the game just 49 seconds into the frame when Jakobsen found Silke Glud for the one-timer before Svejdova could slide across.

At that point, in an effort to salvage some points that could be crucial in attempting to even qualify for the quarter-finals, let alone win the group, Tomas Pacina pulled the youngster Svejdova in favour of Klara Peslarova, the team’s usual starter.

The Czechs did get a few chances after that but simply ran out of time.